The American Mathematical Monthly shows the problems of the issues from the years 1894 through 1922 free of charge, so I tried some of them.

2973 A straight brass bar 800 feet long expands 2/3 foot. The ends are fixed, so that it is distorted. If the new shape is that of an arc of a circle of which the original bar is the chord, how far above the center of the bar in its original position will the center be in its new position?

2974 A man standing on a straight railway track watches a train starting from a station half a mile distant and notices that it approaches at such a speed that each puff of the exhaust is heard at the same instant that the next succeeding puff is seen.
How long will it be before the train reaches him, the drive wheels of the locomotive being sixteen feet in circumference?

We reckon a mile is 1609 meters, a foot is 0.348 meter, the speed of light is c=299793000 meters/second and the speed of sound is a=343.2 meters/second (supposing the air is dry and the temperature is 20 degrees celsius).
Furthermore, we suppose that the train keeps approaching with the velocity it starts with.

2976 The base of a variable triangle is fixed, the opposite vertex describing a straight line. Find the locus of the symmedian point, the locus of the center of the nine-point-circle, and the envelope of the Euler line.

Sketch of a partial solution:

The Euler line is the straight line through O1 and O2.
It is straightforward to find an equation X.N(λ) = c(λ) of this Euler line, where X = (x,y) and N(λ) is a unit normal vector and c(λ) a constant.
Thereafter, we can calculate an equation of the envelope: eliminating λ from X.N(λ) = c(λ) and X.N'(λ) = c'(λ), where the accent denotes the derivative.

2977 A point moves in such a way that its polars with respect to two given conics intersect at right angles. Prove that the locus of the intersection is a rational quartic curve, and find its double points.

2979 If a tangent be drawn from a variable point of an ellipse of length equal to n times the conjugate semidiameter at the point, the locus of its extremity will be a concentric elipse with semi-axes equal to √(n2+1) times the semi-axes of the original ellipse.

2980 Locate a point such that the sum of its distances from the vertices of a given polygon shall be a minimum.

Sketch of a numerical solution:

2981 Find the envelope of the (variable) circle on which two diametrically opposite points divide in a given ratio the focal radii of a variable point on an ellipse or hyperbola.

2982 A triangular yard has a post at each corner. Given the lengths of the sides of the yards and the posts, find the length and the position of the foot of a ladder that will just reach the top of each post without changing this position.

2984 Find the number of numbers of n digits that can be written with n consecutive digits, allowing all possible repetitions, such that the sum of the digits in each number is a multiple of n.

2985 Find the number of combinations of n digits each that can be made with the first n consecutive digits, allowing repetitions, and such that the sum of the digits in each combination is a multiple of n.

Counting 0 as the first digit and 9 as the last one, we find the following list of answers (n,answer(n)):

2986 A triangle is inscribed in a circle. The arcs in which it divides the circumference are bisected at points forming the vertices of a second triangle. A third triangle is derived in the same way from the second, and so on.
Prove that each set of alternate triangles approaches a limiting position.

2987 A flexible chain of length l and uniform weight is fastened at one end to the ridge of a roof with pitch p and slant height L. If the eaves of the roof are at height h from the ground and the coefficient of friction between the chain and the roof is μ, how long will it take, after releasing the chain, for the highest end to reach the ground?

2988 Prove geometrically that if in an ellipse the tangent at P cuts the directrices in Z and Z', and the remaining tangents from Z and Z' to the ellipse meet at T, then PT is normal to the ellipse at T.

Sketch of a partial solution:

We give a sketch of an analytical solution.

2990 If a circle be bitangent to a conic, its center lies on one of the axes of the curve.

We'll prove it for the case that the conic is an ellipse. In the other two cases, we'll have to make only slight changes to finish the proofs.

Now suppose the circle is bitangent to the ellipse. We have to prove that st = 0.

If s is not equal to 0, we may use the first of these 4 equations to derive from the latter three equations three expressions for pq. Then we see that t must be equal to 0.

2992 A semi-circle rotates at a uniform velocity about its diameter and slides along the line of that diameter while making one revolution about it. Find the equation of the surface thus generated.

2993 Let ABC be any triangle, and O the center of its circum circle. Bisect the arcs AB, BC and CA at F, D and E. With F,D and E as centers draw arcs passing in each instant through the adjacent corners of the triangle. Prove that these arcs intersect at the in-center of triangle ABC.

2994 Can the following construction be made without the use of a regulus? Construct a line which meets four given skew lines.

From the following observation we see it must be possible to do so with the help of a regulus:

(It is well known there are in general two lines that meet four given skew lines.)

2998 A cube has removed from it a right pyramid, whose base is a face of the cube and whose altitude is the altitude of the cube.
How far from the base of the cube must a plane be passed parallel to the removed face so as to divide the remaining volume of the cube into two equal parts?

Because of the symmetry, we can restrict ourselve to the half cube where y≤1-x.
Hence we only demand

The inequality holds since for distinct positive s and t holds s/t + t/s > 2.
The second assertion then follows by considering Riemann sums for the integrals, with φ(xi) = ai and δx = (b-a)/n.

3000 Construct a circle whose area is n times the area of a given circle.

3001 In the plane of a given circle, a second circle with a given radius is drawn so that the radical axis of the two circles passes through a given fixed point. Find the locus of the center of the second circle.

3002 Let a and b be the lengths of the diagonals of a quadrilateral, and A the angle between them. Show that the greatest area of a rectangle that circumscribes the quadrilateral is ab(1 + sin(A))/2.

This seems wrong, since in the image below A = φ + ψ

3004 Is there a plane curve such that two tangents whose lengths are in the constant ratio n:1 (n not equal to 1) may be drawn to it from any point in its plane? If so, discuss its properties.

For n=1 there is the circle, if we replace "any point" with "any exterior point".
Of course, the proposer meant "any point outside the curve". I take it he meant "differentiable curve".
Without loss of generality we may suppose n > 1.
If there is such a curve, it must be a spiral.
But the answer is no: if we draw two tangents to the spiral from some point P, and one of the two contact points on the curve is n times as far away as the other, we may move P in the direction of the distant contact point, and the ratio of the distances to the two contact points (one of them new) will become less than n.

3007 Given two opaque spheres that don't intersect, locate the points on either from which the maximum surface of the other can be seen.

3008 The altitude of a right circular cone is a, the radius of its base is b, and its slant height is c. A string is wrapped n times about the cone, starting at the vertex and ending at the base, in such a manner that for any complete circuit the vertical rise (the cone being supposed to rest on its base) is the same. A bird at the vertex takes the end of the string in its beak and flies around the cone, unwinding the string, keeping it taut and always tangent to the curve of the string as it lies around the cone. Find an expression for the distance that the bird has flown when the string is completely unwound (a) if it starts at the vertex (b) if it starts at the base.

Let the curve on the cone have parametrization x(t) and the curve of the bird y(t), 0 ≤ t ≤ 1. The core of a computer program to calculate this distance (in case (a)) is as follows:

3009 Rectangular pieces of cardboard of the same dimensions are piled so that they overhang to the greatest extent possible; what curve do the edges touch?

In hindsight I see other solvers make the k-th card from above overhang the pile under it with 100/(k+1) percent, so that the edges of the cards touch a logarithmic curve.

3012 ... Show how to construct a polygon with its vertices concyclic and with its sides in order equal to the sides of a given polygon.

We have to find the radius R of the circle wherein a polygon with the given sides can be inscribed.
If in this circle a side with length L is a chord, it's subtended by an angle α at the center of the circle equal to 2*arcsin(L/(2R)).
With trial and error and the help of a computer program, we can get close to the right value of R for which the sum of the angles 2*arcsin(L/(2R)) is equal to 2*π.

3014 If 1,p,d are the radius and sides of the regular inscribed pentagon and decagon, and if a triangle be formed from these three lengths, determine the angle opposite p without the use of trigonometric tables.

3021 Prove that the two lines joining the points of intersection of two orthogonal circles to any point of one of them meet the other circle in two diametrically opposite points. 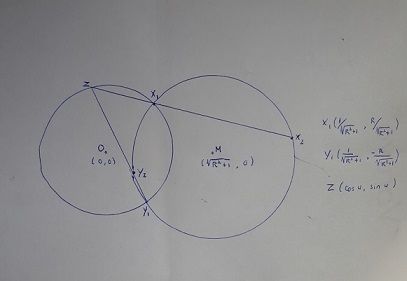 See the picture. We may calculate the coordinates of X2 and Y2, and check that X2 and Y2 and M are collinear.

3029 To locate two points D and E on the sides AB and BC of a triangle ABC such that AD:DE:EC shall be equal to p:q:r, where p,q,r are given line segments.

3046 What is the probability that there will be at least r consecutive heads out of n tosses of a coin?

If r is larger than n, the probability is 0.
Otherwise, the following events are disjoint and their probabilities sum up to the answer.
Event number k (0 ≤ k ≤ n-r) is: the first k tosses are tails, then follow r heads.
So the answer is the sum of 2-k-r, which is 21-r - 2-n.