Some athletes start together at the same starting point for a running contest over a circular track. They keep running clockwise around forever at fixed distinct speeds. At some instant of time each runner may be at equal distance d from the one who runs before him and the one behind him, so that the positions of the runners are evenly distributed over the track. But is there for each of them an instant of time when he is at distance at least d from any other runner?
The conjecture that JM Wills made in 1967 says there is such an instant of time. The problem is how to prove this. This problem has been solved for up to seven runners, but the general problem remains unsolved.

In mathematical terms, we may formulate the problem for k+1 runners as follows:
Given a positive integer k, and k integers d1 , d2 , ... , dk without common prime divisor. Prove there is a positive real t such that for all i∈{1,2,..,k} the product tdi is at distance at least 1/(k+1) from the nearest integer.

Denote the distance of any real number x from the nearest integer by ||x||.

We may use the following Pascal program to search for an approximation of the minimal t if k is at most 100 and the k given integers are within standard pascal range:

The square in the loop

Prove that in any loop that doesn't intersect itself there exists an inscribed square.

With a pascal program we may systematically search for four points on the loop that are the vertices of a square.
As an example, I did this with the raindrop (t3-3t,3t2), -√3 ≤ t ≤ √3, and found (approximated values of t, x, y, resp):

Find the minimal area that can cover any curve of unit length. 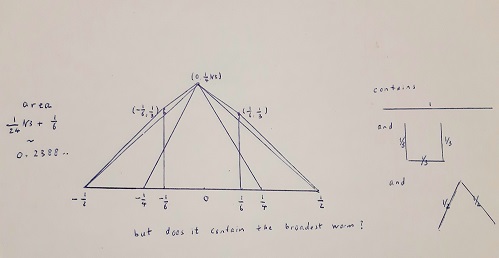 The set of all 6-tuples of positive integers is countable, so we may see whether the equation holds or not for every such 6-tuple in turn, in the order of an enumeration of all these 6-tuples.

We easily find all 65 known idoneal numbers among the pascal integers with the help of a pascal program. The largest of these is 1848. But perhaps there exists an idoneal number greater than 32767.

Minimal sum on a sphere

I wrote and ran a pascal program to generate n points at random on the sphere many times and write down the sum and the coordinates of the points whenever the sum is less than before.

The outputs indicate that for small n the minimal sums are approximately equal to n2/4 - n + 1.

Lost in the forest

A convict is dropped somewhere in a forest by a helicopter. He is equipped with a compass and a laptop that provides a map of the edge of the forest and a pascal compiler. Which path should he follow to get to the edge and escape from the forest?

I take it the convict decides to choose a fixed direction and head that way in a straight line until he reaches the edge.
To find the best direction among 360 directions with the help of a pascal program, he may make the edge input of the program. This edge encloses a finite but large number of forest points.
Then, for each of the 360 directions, he can find among these forest points a worst point for which the distance to the edge, when heading from that point in that direction, is maximal.
Finally, he will choose a direction for which this worst distance is minimal.

For example, the map and the program might be the following: 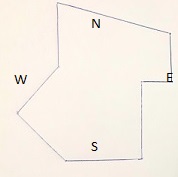