A Spanish bishop from Myra

Maastricht's first telephone connection was constructed in 1880 between two shops of a gentleman named Maussen. This man had also the first 'tubes luminescents' (tl-tubes) installed, which happened in 1932 in his new department store.
Sinterklaas was keen on doing business with this energetic entrepeneur. In the years nineteenhundred and fifty, he received the children of shopping mothers in his own corner of the store. The photo below shows us the good bishop, reprimanding my elder brother and me, because his clever servant Swarta Pete (Zwarte Piet), next him, had told him about the mischief we had done.
Sixty years later on, I can't think of anything bad about the exotic couple. Whilst the wind was blowing loudly through the gardens, the good Saint was riding over the roof tops on his grey stallion. Swarta Pete threw presents through some chimney into our shoes, from which he also miraculously took out the carrots we had laid there for the horse.
At school, in the third form, we learned that the real Saint Nicholas never came from Spain in a steamboat. In times long ago, he had been the bishop of Myra, which lies in today Turkey, and his relics lie in the Italian city of Bari. But competent people say he did throw gold at poor girls through an open window. In the end he became the patron of, amongst others, sailors and children.

In the years nineteenhundred and twenty, Sinterklaas was already well known as a friend of children, albeit a strict one. The goodies got sweets, but the baddies a flogging. My own father was then still a rascal, so Swarta Pete proceeded upon putting him in the big bag of Saint Nicholas without mercy. If the headmaster wouldn't have interfered, my father certainly would have been carried to Spain in that bag.
Even during the last decades of the past century, young fathers would use Swarta Pete to frighten their kids, although ever more people asked themselves whether this was a good instrument for education. Then the father would phone up Swarta Pete to inform him about bad behaviour, while the mother was anxiously watching the fearful children.
How did our good holy man ever get this laughing servant with sadistic features? Even without the booklet 'Saint Nicholas and his Servant', written by a nineteenth century teacher, Swarta Pete would have existed up to now in some shape. Because in other countries similar characters are helping the bishop, although they aren't necessarily black. For instance, in Germany there is the Servant Rupert (Knecht Ruprecht), and in France there is Father Whip (Père Fouettard). In the Alps and central Europe, Saint Nicholas has a 'little' helper who is in fact a terrifying character, named mr Claw (Krampus). This fellow is either wearing a devil's mask, or painted black. 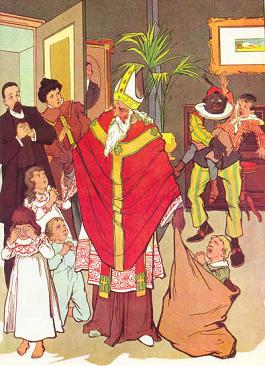 Research into the folklore of northern european countries shows there exist many similarities between Sinterklaas and the germanic supreme god Wodan.
As Sinterklaas is gallopping through the sky by night and by day, so is Wodan on his eight-legged horse Sleipnir. It strikes us that Wodan is accompanied by two black ravens who tell him everything they have seen or heard. Our early ancestors also would find a sort of gingerbread puppets under the hole in the roof through which the smoke of the hearthfire could escape into the open air. These puppets were intended to provide fertility.
Among the germanic men, the right of the strongest prevailed. They make me think of the members of present-day motorclubs. They would drink much beer, and gamble, putting their own wives at the stake. They loved fighting. Whoever died during a fight, was allowed to fight on forever in Valhalla.
The germanic men also formed men's unions, like the present-day motorclubs, because then nobody could stop them. They would follow Wodan through the sky, riding on billygoats during a Wild Hunt. In several regions, disguised young men would claim the right to run around and steal or chase girls.
Christianity has gradually softened all the criminal folklore and reformed it into an innocent pleasure. Wodan was reduced to Satan, and replaced by Sinterklaas, who adopted the soft characteristics of the one-eyed god. The satanic characteristics, however, were transferred to characters like Krampus and Swarta Pete.

When I was a child, the Catholic Church was rather self-complacent. The missionaries would tell in their journals how superstitious the blackies were, and how necessary it was to convert them to Catholicism. Mind you, these missionaries just told what they found, and there was much superstition indeed in Africa.
In the booklets about Puk and Muk, the African medicine man was a villain, and indeed there were in Africa many villains among the medicine men. In another booklet, Puk and Muk got a black little friend, named Moortje. I thought this was a very clever little fellow, surely cleverer than Muk.
White people already admitted that black people had qualities of their own. For example, they couldn't deny East-Africans are often good runners.
People then still would appreciate the own qualities of women. For instance, in the books about Puk and Muk there was a merry aunt Cornelia who always was busy with baking cakes and repairing clothes.
Of course this doesn't mean that women or black people can't have those qualities which formerly used to be considered specific qualities of white men. Nowadays, women and black people are so emancipated that in 2009 Barack Obama, a black man, was the American president, and Hillary Clinton, a woman, his minister of foreign affairs. 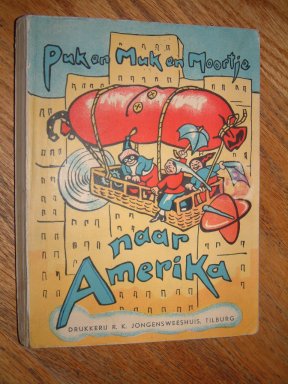 This leads me to the discussion about Swarta Pete. Some people assert the phenomenon Swarta Pete is a form of racism. I think the supporters of this assertion are bores. (The Dutch word for 'bore' sounds like 'Sir Pete'.)
If we paint some Petes yellow or green instead of black, then this makes the feast of Sinterklaas become blurry. Because the feast stays alive only if we render almost exactly what we remember from our own childhood.
The feast also gets blurry if we change the songs about Sinterklaas. "There under in the sack there is a very scary pleck", sounds more exciting than "there under in the sack there lies the very finest pack", especially because we don't exactly know what a 'pleck' is.
Fortunately, the assertion of such a Sir Pete doesn't have many supporters, and these people apparently don't know much about our Sinterklaas tradition.
Isn't it great that some people are black and others white or having a colour in between black and white? And that about half of the people are men, and half of them women? What's wrong with a black woman having full lips?
So it's a bit sad if somebody wants to corrupt a children's feast, just because he thinks everyone should be the same.
There's a remedy against this nonsense: that the Servant Rupert come from the forest, like in the picture below, and put the sad complainer into the sack.
Our emancipated Swarta Petes would cheer at it.
But ... it's not that important. 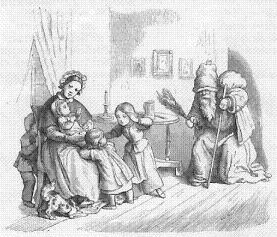