THE FRATERNITY SAINT PIUS X IS WORTHY OF RESPECT 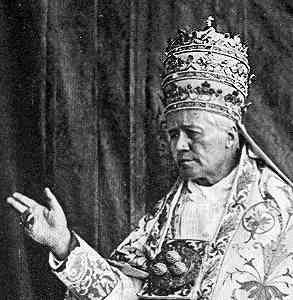 
The devil derives much benefit from the way the media damaged the respect for the Church during the last few weeks. This is partially due to the fact the bishops lacked discretion.
First, the traditionalistic bishop Williamson gave a crippled interview in which he tried to deny the Holocaust. Although we need not doubt his pastoral intentions, it's evident he is no historian. The superior of the fraternity Saint Pius X immediately dissociated himself from the opinion of his colleague.
Secondly, the pope lifted the excommunication of Williamson and three other men whom archbishop Lefebvre had highhandedly consecrated bishops twenty years before. Pope Benedict did this as a good shepherd who is concerned about all his sheep, but he didn't know yet what Williamson had said.
Poor bishop Williamson with his complot theories was made a scapegoat, and he was hunted and ridiculed everywhere.
The Dutch bishops reacted as if a swarm of flies were settling on their heads. When the pope was still welcoming the four prodigal sons in the hall, the bishop of the Frisians yelled from the living room they were diffusing a musty odour. They were still suspended and had to accept the entire Second Vatican Council that had set the windows to the world wide open.
A confused Dutch professor of ethics wanted to leave the Church like a toddler who runs away from home.
Meanwhile, the Dutch got the idea that their Catholic bishops and priests were ashamed of the Catholic Church as it was before the council. The well-known priest Antoine Bodar, for instance, called the fraternity Saint Pius X idiots on television, so the presenter of the tv-program had to remind him that many Dutch children go to a school named after pope Pius X.
Why is this all taking place in the Netherlands rather than in, say, Belgium? Because the lobby of Protestantism and Judaism is much stronger in the Netherlands, by its relation with America. I will elaborate this hereafter. 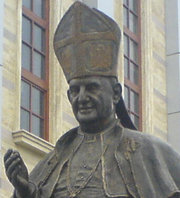 God's people on its way to the desert


It's no coincidence that Protestantism found a fruitful soil outside the limits of what once was the Roman empire, in the countries that of old were Germanic. Although the northern tribes had in the long run been converted to Christianity, the old craving for freedom was still deep-rooted. Why should that pope in far away Rome command them?
The iconoclasm was a sort of second bloom of the Wodan's chase. Freemasonry, too, could be a continuation of the old Germanic brotherhoods. Two centuries after the Renaissance and the Reformation, eighteenth century Protestant liberal thinking was among the main causes of the Enlightenment and the erroneous subjectivistic philosophy of Immanuel Kant. The same liberal thinking was at the root of the French and American revolutions.
So the Protestants left the Catholic Church because they exaggerate their personal freedom. But they also exaggerate their personal relation with God. They find inspiration in the Bible above all. Their kids suck the stories of the Old Testament with their mother's milk. Just like the Jews, they consider themselves an elected people with a special mission. They especially took up the order to conquer the earth.
What has become of the world since the Reformation? Science assumed enormous proportions, but this didn't only bring good things. In fact, we are now being threatened by atom bombs, air pollution and plastic refuse. And, ironically, man considers himself ever more a machine, an animal, and a number. At the moment we are frightened by the financial crisis. This originated in God's own Protestant country, the United States of America, with which the Netherlands have a strong relationship because in the last four centuries a lot of Dutch Protestants have settled there.
I must admit I'm sensible of the charms of free America. The Americans, together with their English and Canadian allies, freed us from nazism. However, the United States have now too much influence in the world. Nowadays, the western democracies make a parade of free speech and dialogue in imitation of America, but in fact the dictatorship of public opinion prevails, and public opinion is generated by the media that have money. Since the last council, the Roman Catholic Church in the Netherlands has become rather Protestant under the stress of the public opinion. 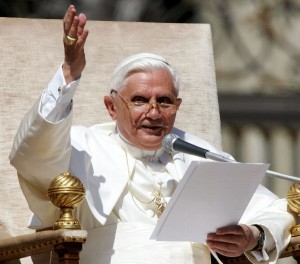 
The appeal of the fraternity Saint Pius X doesn't only rest on nostalgic sentiments. If it did, everybody would quickly run away from it. When I first made acquaintance with the fraternity, they told me my marriage was null and void and I had to do away with my television set. When teaching catechism, they tell about the predictions of prophet Daniel, and that God created the earth within six days some six thousand years ago. It also seems the disciples of Lefebvre are living in a sort of splendid isolation, and don't see their high ideals are practically unattainable for modern people. That's why many weaker brethern draw a blank with them.
But the good things are holy Mass and thomistic philosophy.
Tridentine holy Mass is more reverential than the modernistic one, because the priest turns his face to the tabernacle and uses the Latin language throughout, and because the faithful receive holy communion on the tongue at the communion rails.
The philosophy of Saint Thomas Aquinas is a synthesis of the philosophies of Aristotle and Plato. The First Vatican Council prescribed it as the one and only philosophy of the Catholic Church. It makes clear that our human soul is immortal and that its purpose is the eternal contemplation of God.
Pope Pius X condemned every subjectivistic concept of belief in his encyclical Pascendi, and he prescribed the oath against modernism for priests.
Has this all become untrue? Is there no more place for the Gospel according to John next the Gospels of the other three evangelists? Has dialogue become a dogma? Then let's have a good dialogue with the preservers of preconciliar thinking in the first place. This is the very intention of our new pope. Fortunately, this kind of decisions are still made in Rome and not in the Netherlands.
If the Church would unanimously and enthusiastically agree with the papal initiative for a dialogue with the disciples of Lefebvre, then this could be the beginning of a new Europe that offers a sound counter balance against the influence of the United States. Then perhaps many new large monasteries would be founded, full of people who want to live in obedience and purity and poverty like Saint Francis to the great mental benefit of mankind.

dr HFH Reuvers , Maastricht , 4-th of March 2009
(I was a teacher of mathematics, but retired recently because of my hardness of hearing. In the early nineties I followed the courses 'Catholic faith in our time' of the episcopal diocese Roermond, and thereafter I have been a Mass server in the Maastricht chapel of FSSPX for some years. In my childhood I did the preparatory seminary of the Carmelites in Merkelbeek and Zenderen.)