PETE RICEPUDDING AND THE MEN FROM RIO


In the old city home of Pete's mother, there were two toilets. One was far away in the garden, and was called 'the ease'. It was only a hole in the ground, with a drainage to the well nearby. There was a little wooden privy built around the chair, which was closed with a cover. The other toilet, called the wc, was in the house. This wc had been made only fifty years ago, during a grand rebuilding of the house. It was connected via an old pipe with the city sewerage. This pipe had a angle in it which was too acute. Therefore, Pete's mother had hung up a little paper for the guests, on which it said that they kindly shouldn't throw any towels into the toilet.
Long time ago, the wc was stopped up. The man of the near sanitary shop had sent a handyman. This boy made the pipe clean with a strong squirt, and the wc was pulling again like a whirlpool. The bill wasn't cheap, but the old woman readily paid it, because her old legs didn't take her in bad weather quickly enough to the ease in the garden.
One day, Pete was with his mother for a visit. His girl friend from Kazakhstan was present too. People of Kazakhstan often throw little old threadbare towels into the Kazakhstan toilets, which are always greedily pulling. According to custom, she did the same in Limburg in the house of Pete's mother. The wc didn't accept that, and refused any further service. The Pete had the unfortunate idea that the old man of the sanitary shop would be too expensive. He called the 'Rio' sewerage team instead. 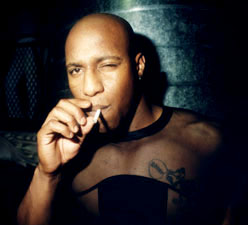 It took several hours before the boss of Rio, Kees, arrived to have a look. He was a tall fat guy with a cigarette in his mouth and trousers half way down. His lubberly son, Wim, had come along to learn the job by watching. Kees was knocking about the house, to and fro, always shaking his head. Finally he declared that he couldn't find the lump. Was he allowed to break the pipe in the cellar? Tomorrow, he would send somebody with a camera to inspect the pipe. He was immensely busy, one half of the city was in high emergency. But he would do the best he could. When Pete proposed that he could perhaps clean the pipe with a spout, Kees laughed and said that all of the house would be full of filth.
Kees and Wim left, and Pete was sitting with the two ladies in a house where they were not allowed to wash the clothes and dishes, leave alone to cook. They ate their bread, and went through the rain to the ease far away in the garden, one after the other. They envied the dog and the cat who could easily sit down wherever they wished.
Next morning, Kees rang the doorbell at dawn. He had brought two colleagues with him. They began to work immediately. One man, called Roberto, began to hack a new hole in the floor next the wc. Kees himself made quick little sketches on a piece of paper, to show that the pipes should be replaced by newer ones. The third, Jean, was busy in the garden, calling with his portable telephone. Before long, a fourth man was standing at the door, called Willem. He wore a picobello suit, and composed an offer using his laptop ... five thousand euro. Taxes were inclusive, and the whole broken site would be fine and clean again.
Pete and his mother first looked at each other, and then to the ease far away in the garden. They looked at the shed of the sanitary shop, in the garden next their own garden. Pete cleared his throat and kindly asked the workmen to beat the retreat. But the bill was already rather expensive.