PETE RICEPUDDING AS A PIRATE


You may believe it or not, but it is true: when Pete was about twenty years of age, he was crimped as a pirate in Rotterdam harbour. Those days, he was roving through the pubs and looking wild and savage. He climbed aboard an old three-master, named "the Lords Seventeen", was introduced to captain Thunderstone, and got a knife as long as a table-leg.
That night they went to the open sea. The Rotterdam hussars didn't stop them, because they were glad enough to see them disappear. The pirates sung the song of the Sea-eagle, the song of the rum, and the O Sole Mio. They kicked against the cat, were quarreling all day, and ate ship's biscuit with tropical-fruits jam.

As soon as a ship appeared on the ocean, they were shouting loudly with joy. Their proud ship was like an arrow from a bow, and ran through the salt waters. The merchant was scared and trembling with fear, the sailors execrated that bloody day. And see, their blood-red pirate flag climbed the long mast.
They boarded, stole the ornaments from the ladies and the watches from the men, and disappeared as soon as they had come. Then they would laugh and divide the spoils among themselves. And if anybody complained, they threw him overboard without compassion. You understand that it wasn't long before the sea-police were hunting after them. 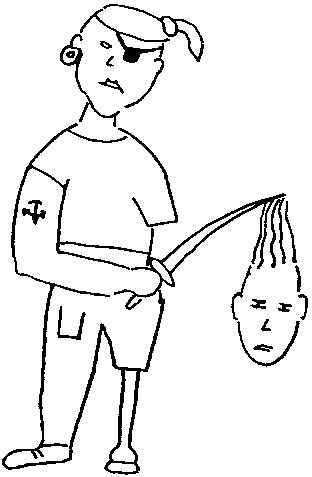 They were hiding on remote islands in the Pacific Ocean. The natives had never seen a watch before, and thought they were gods. The most beatiful girls with flowers in the hair were swarming around them like butterflies and singing their wonderful songs from Tahiti.
One bad day, the captain said they should go again into the open sea. But the corsairs refused to go with him, for they had never been in such fine circumstances. The quarrel ended thus: the captain was brought miles away into the sea , set into a row-boat, and left behind there all alone. "See, captain!", the pirates said, "Thou chooseth sea again, but we choose the beaches of Tahiti."

After years, an English police boat passed by. Many pirates were somewhat older and a little doting, and they could be caught without trouble. The strangest thing was, they were all rather deaf. The ship's surgeon inspected their ears and saw that they were full with tropical red currants.
"Why have you currants in your ears?" asked the surgeon, in English. It took many minutes before the pirates understood the question. But finally, one of them gave the answer: "Pete Ricepudding, him say to us you must stick them in your ears".
And Pete himself? He saw the angry surgeon fumbling the currants out of the ears of ten pirates, waiting in a row.