PETE RICEPUDDING AND HIS OLD DOG


As soon as Pete Ricepudding had passed the exam for his swimming certificate, he got a little German shepherd's dog from his mother. It was a real jump-in-the-field who loved to run after tennis balls and to play tug-of-war with Pete. And he looked so disappointed when first he had to sleep alone that Pete decided to take him in his own bed.
As he grew up, he would guzzle more and more dog's food. He became a giant beast, but Pete kept him under his thumb. Every day they would go for a long walk on saint Peter's mountain, wet or fine.

The dog's name was Hannibal, but they would call him Cannibal as well. He understood his own name and many other words that Pete had teached him, like "sit", "come", "stay", etc. When Pete said that he wished to go home, or that it was time for dinner, then Hannibal would understand that very well. And all boys Pete was at odds with would make a large detour to avoid meeting Hannibal.
One hot summer evening he had disappeared, and he had not even finished his dog's meal. Was he making love with a beatiful bitch? Nobody knows. Pete did not worry too much. After a few hours Hannibal gaily came strolling home again. He sat down next Pete, his tongue slavering outside the mouth, and watched Pete eating cheese and drinking wine. 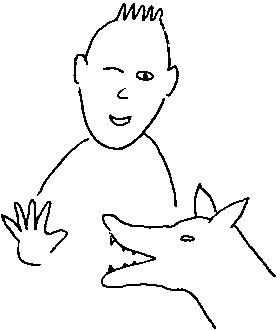 He never was sick. Only once, when he ate nothing and lay whining in a corner for a couple of days, they went to the veterinary. The physician saw no less than three rotten teeth, and pulled out all of them. Then Hannibal was well again, but he never got tinned meat any more.
In this manner the beautiful shepherd's dog reached at the respectable age of fourteen years. This milestone gave rise to a festive bone for Hannibal who gnawed it furiously and buried it in the garden. And Pete took him for a very long walk through the forest.

You understand that the old dog didn't walk as fast as he used to do. He did potter after the tennis ball, and he would lay his foot on the knee of Pete. That year when he was fourteen years of age, he didn't leap up very quick when Pete called him.
Now they went for shorter walks, and they often were sitting in the garden. Then Pete told the stories about the olden times of yore, when Hannibal was young, and the dog yelped, grumbled or shut his eyes according to the tone of Pete's talk.
But on a summer day, the dog was standing in front of his kennel for hours, watching it with the head bent down. That evening, Pete had to bring him inside and lay him down. Damned, it was difficult for Pete to withhold his tears. The dog sighed and quietly fell asleep, never to wake up again. He got a beautiful grave in the garden, with a board upon which Pete had written with neat letters: "Here lies Hannibal Ricepudding (1980-1994). He was a real friend."