PETE RICEPUDDING IN THE LIEGE CHAPEL


Pete's mother had learned Pete always to attend Holy Mass on sundays. When he was a little boy, he devoured the stories about missionaries and Blackfoot-indians, and about the brave little shepherds of Fatima. Thus he considered the changes of Liturgy in the sixties to be so much the worse, as if a chaplet of red roses had been transformed into a cup of weak tea by witchcraft.
Now Pete learned from his Maastricht friends that the beautiful old Mass continued to be celebrated in Liege, every sunday, in the chapel of a hospital. He took a map of Liege from the book-case and, indeed, there was the hospital, in the old district Outremeuse. And Mass would not begin before eleven o'clock, so there was plenty of time to get there.

Next sunday, Pete took his bicycle at a quarter to nine to go to the railway station, and stepped into the ten past nine train to Liege. He had to get out in Bressoux already, one station before the main station Guillemins. The weather was beautiful, and he felt relaxed enough when looking for the right direction in the 'ardent city', which was just waking up. The bakers and supermarkets are all open on sunday mornings.
When Pete came at the place where the hospital should be, he was very surprised: there was a large open plain, a meadow where a circus had pitched its tents. The map of Pete was ten years old indeed, the hospital had apparently been pulled down. 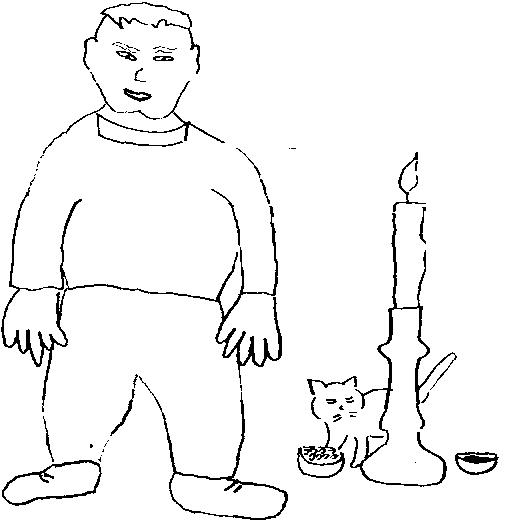 Happily, Pete saw an old chapel at one side of this large prairie for dogs. Nobody ever dared to pull down this chapel, because it was much too beautiful. Pete patiently waited until a quarter to eleven, then a worthy thick old man with white hair and a white priest-collar appeared on his bicycle and opened the chapel door. They nodded to each other in a friendly way, and entered the chapel.
It was a splendid seventeenth-century chapel. The altar was a couple of metres higher than the pews, you had to mount ten steps to get there. Pete noticed another thing as soon as he was accustomed to the dusky twilight: there stood little trays with milk and cat food in it. They apparently were for a cat that had to keep the mice outside.

The priest slowly mounted the steps to play the organ. By and by more people came into the chapel. An old man too mounted the steps. Did he go to confession? He came back in a minute. Had he confessed to the priest who played the organ without a pause? Then maybe he had only said "la męme chose", the same sins as always, and the priest had absolved him using one hand.
But no, that 'priest' turned out too be the sexton. As soon as Mass began, wonderful organ sounds descended upon the people, and the real priest and his altar boy began the worship in elevated style. It was as if a heavenly choir stood singing from above. But ... that was impossible, there were no more than thirty people attending Mass. That could only be a record or a cd, and the sexton providing for the playback.
But nevertheless, Pete went home in peace after the Mass. This surely was an excellent manner of bringing honor to God.