PETE RICEPUDDING IN THE HOSPITAL


Pete Ricepudding read an advertisement in the newspaper that excited him very much: the hospital was looking for people who once had got stomach-ache after eating cherries. These people would be interviewed in the hospital, and they would receive a little bag filled with cherries. Then the doctors could do research to know why people get stomach-ache when eating cherries.
Pete remembered very well that as a child he used to stay with his uncle Harry in Gronsveld. Uncle Harry had a large orchard with cherry trees behind his farm. Pete was allowed to help gathering the cherries, and he got a few cherries to eat. Then he had an awful stomach-ache all night. Everybody thought that this was strange, because he had eaten no more than ten cherries. Now he would finally know why he had suffered so much that night.
He called the hospital immediately and said that he liked to participate in the cherry research. He got orders to come to the hospital next day, at ten o'clock in the policlinic, section A7. That morning he was not allowed to eat nor to drink.


Next day when Pete came in section A7, the waiting-room was full with waiting people. There was a cute young lady, about eighteen years of age, dressed in a Levy suit. She looked oppressed as if she had just eaten cherries. And there was a large fat man in a neat grey suit, who waited for his cherries with closed eyes and half open mouth.
Pete sat down next an little old woman. She looked at Pete through her glasses, and asked if this visit of his to the hospital happened to be his first one. And before Pete could answer this question, she told him that she had stomach-ache, especially after eating pudding, cherries, or mushrooms. "Yes", said Pete, "those cherries are not as innocent as they seem to be".
Suddenly there came a little boy with a dog in the waiting-room. He was about seven years of age, and the dog was a young shepherd's dog. Everybody looked at the dog and his little boss, who were sent away by a nurse. There was a loud laughing and shouting: "That dog has stomach-ache!", "Of course!", etc. Then the little woman next Pete touched him: "Is your name Pete?", she asked, "It is Pete's turn right now!" 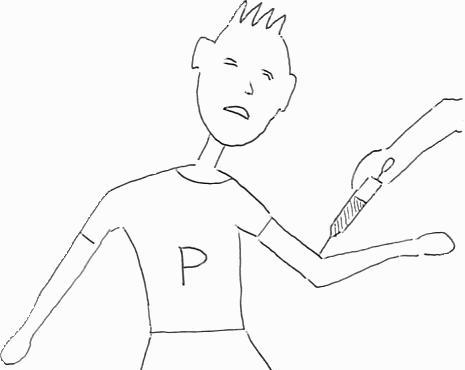 A very pretty little nurse turned up, who accompanied Pete to a research room. There stood a doctor with a large injection syringe. "You are not afraid of a little prick?", he said, and he tipped the nurse a wink. She sat down to the writing-desk and began filling in a form.
The doctor looked for a vene on Pete's arm, and, chatting about the cold weather and the heavy highway traffic, he took from Pete many tubes of blood. When he finally finished, Pete was wavering. "Okay, fine", said the doctor, "Well done, my dear". And the nurse said that Pete could come back next week, same time and same place.
"Wait a bit", said Pete, "Next week I stay with my mother. Perhaps you'll note down her adress and telephone number? Spilstraat 13-B, 043-33311251. When you need me, I'll be there." The nurse laughed naughtily, and wrote down the data on the form.
When Pete went out via the waiting-room, he saw that it was the fat man's turn. He looked at Pete with questioning eyes. "I have not had cherries as yet", said Pete, and the fat man looked wonderingly at the large nurse who came to accompany him. His disillusion was clearly visible.


When Pete came to his mother later on that same day, he told an extensive account of his hospital adventures. His mother said that Pete had been very ill that summer night in Gronsveld with uncle Harry, after eating the cherries. He looked very pale then, but now, she said, Pete looked even paler. How many tubes of blood had the doctor taken? "Seven tubes of blood", said Pete.
Next day Pete's mother turned up with a strange letter. "Look what the postman has brought", she said, "a letter from the hospital for Pete van der Beeck." She opened the envelope, and they read together: "Dear sir van der Beeck, our appointment of wednesday the eleventh of March at ten o'clock must be postponed to wednesday the eighteenth of March, same time."
And when Pete came to his own home in the afternoon, to fetch up his tooth brush, there was a letter for Pete Ricepudding on the door-mat. "Dear sir Ricepudding", it read, "we regret that you didn't come to the hospital last wednesday". Then Pete understood that, in the hospital, they had mistaken him for another Pete. There had been no cherries, but blood-shed. And he still didn't know why he had stomach-ache with uncle Harry, after eating no more than ten cherries.