When Pete Ricepudding grew older, he decided to become a courier of loveletters. He himself had had a lot of experiences with falling in love and beautiful girls, and now he wished to help other men walking on the risky road of love.
He placed an advertisement in the newspaper with the following content: Ricepudding Loveletters Corporation, composition of loveletters and messages d'amour. Ricepudding_p@hotmail.com .
Thereafter he changed his living room into an office, with computer and telephone and writing-desk. He pasted a big poster of Fred and Wilma Flintstone onto the wall, and a little one of Brigitte Bardot as a twenty year old photo model in bathing suit.
The first day, very few customers appeared. Only a thirteen year old boy with glasses that were too big for him as yet. Pete said that he'd better wait and come back again after a couple of years. And a very old crooked little man who had run away from his little wife. But Pete saw through the window that this little wife was coming after him, with a chain in her hands.


The next morning the first serious customer appeared: a big fat man who was in love with a young lady named Elisabeth. The man said that she was the most delicious blonde of the whole world, and that blondes were the women he loved the best. She worked in the cleaning team of a lawyer's office, and he didn't dare to speak to her. But he couldn't stop thinking of her, even when he was asleep.
Pete had written down everything, and he looked at the man with understanding. He would design a method of managing the case, and perform the operation after a period of careful thinking. The customer should not worry about the cost, because Ricepudding worked for a "low budget lump sum".
Now Pete showed the fat man the way out. He asked him to come back after three days. He withdrew in his sleeping room with a lot of deep thoughts. After a quarter of an hour his face brightened. He hurried to find a pencil and a piece of paper, and began writing like a fool. 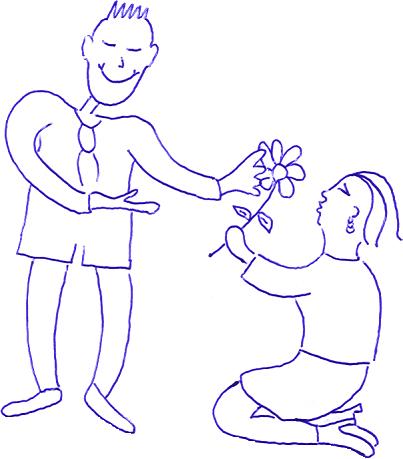 In the afternoon of the same day Pete called the Maastricht lawyer's office where the girl used to work. "You speak with Ricepudding Loveletters Research", he said, "I'd like to speak to mrs Elisabeth Filette. She works as a member of your cleaning team". The girl came to the telephone and he told her that he wished to have an interview with her because of a declaration of a client concerned. He put on a neat grey suit with a red stock and run to the adress that the fat man had given to him.
Elisabeth was a very pretty girl indeed, with an arch turned-up little nose. When she laughed, one could see little dimples in the cheeks. She had put off her cleaning uniform and was waiting for Pete wearing a gaily flowered little gown and high pumps on her feet.
Pete stood in front of her and asked the bystanders to leave them alone for a while. She seemingly was a bit nervous, for she had no faint idea of what the stranger wanted to declare. He smiled to encourage her, cleared his throat, looked into the depths of her eyes and began to speak:


"O Elisabeth", he sighed, "I understand very well that mister William van Veldkamp loves you. That your blonde hairs and blue eyes drive him to despair. He cannot stop thinking of you. Your beauty is like the dew from heaven and the red of dawn. Elisabeth, say to me, are you willing to meet mister van Veldkamp?" Now Pete tipped her a wink, and nodded assent himself, while looking at her in expectation.
Elisabeth looked a bit perplexed, she didn't know whether she should laugh or cry. For she happened to have made an end to a painful love story recently. But after a few minutes she nodded assent, laughing in tears.
On the third day she came into the office of Pete Ricepudding. She hugged Pete immediately and cuddled him so much he couldn't breathe. When the fat mister van Veldkamp entered, he recognised the situation immediately . "I withdraw", he said with a sad voice, "I see that I should have done it myself." That was the end of Pete's career as a courier of loveletters. He spent a nice couple of days with Elisabeth. Then he began thinking about the question which other work would be suitable for him.