PETE RICEPUDDING AS A PARISH PRIEST


When he was a little boy, Pete Ricepudding already wished to become a parish priest. There in Tongeren, where he lived, he would go to church every day. And on the way back from school, he would go into church again to pray the rosary before our Lady's statue of grace. Sometimes, he forgot the time, and then his parents found him, absorbed in his beautiful thoughts.
Pete got a little booklet from the schoolmaster, about the wellknown vicar of Ars. This holy parish priest offered all his goods as a sacrifice for the poor and for our Lord Jesus. This impressed Pete very much. Little Pete Ricepudding often silently gave his bread to the neighbour's dog. The dog followed him wherever he went. The people of Tongeren thought that the devil had taken possession of this dog.

When Pete was fourteen years of age, he said to his confessor that he wanted to become a parish priest. This plan was not without difficulties, because his father wanted him to succeed him as a shoemaker. But the confessor wished to help Pete, and gave him lessons in Latin and philosophy during several hours each week.
When Pete's father suddenly died, the mother had to earn a living for Pete and sixteen younger children. Pete became a shoemaker, and did the best he could to keep up his father's customers. Only after many, many years, when he was already seventy, Pete was able to finish his studies to become a priest. 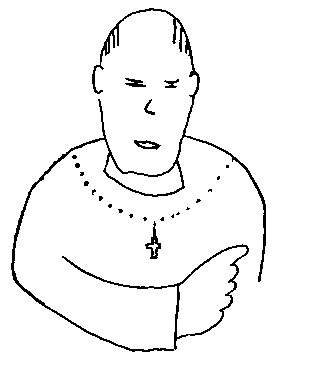 After being ordained a priest, old Ricepudding was appointed parish priest of Malberg. Malberg was a Maastricht city district with many problems. There were 5000 parishioners, but only 50 of them regularly attended Mass. These 50 did much work as volunteers, so Pete had time to spare.
In his cassock he walked to the inner city of Maastricht, and he invited all tramps, junks and drunkards to come to him in his Malberg parish house and eat a cup of soup. They came, at first shy and with two or three at a time. But after few weeks there was a daily procession of several tens of tramps, gaily walking up to the parish house.

The men and women greedily gulped the pea-soup which the parish maid gave them. As long as there were few of them, Pete talked to them with seriousness, pointing out to each of them his duties as a catholic. But as soon as there came too many of them, the situation outgrew him.
A disquieted person from Malberg informed the bishop that the parish house had become a piggery, and within a few weeks the bishop removed Pete to the parish of Bolder.
And during many years after, tramps from the French-speaking part of Belgium continued to come to Malberg. They would ask for "le bon pasteur de Maubeuge".