We have no permission to say how we got to the lion's den together with Pete Ricepudding, nor are we able to do so. Of course, we made the trip to Islamabad incognito, and were welcomed by our friends from Pakistan. We spent hot days and cold nights in refugee camps, clothed in typical Pashtun clothes and pasted with long black-and-white beards. We have been walking during several days and nights over almost impassable Afghan mountain paths, past steep abysses and followed by a stubborn little donkey that bore the luggage. Pete's little coffee apparatus has saved us from exhaustion.
For admittance to the unapproachable Bin Laden, who was watched over by severe guards, we undoubtedly are indebted to the many luxury bonbons that Pete had taken along. And that the mastermind granted us an interview in English, has much to do with the fact that Pete could return the cold glance that Osama cast upon us with an even cooler glance. And we are ashamed to say that we threw ourselves like hungry wolves on the Afghan cookies offered to us, but we are proud that Pete refused them in a friendly yet firm way.
We don't even now understand how Pete Ricepudding dared to do it, but he asked Bin Laden in an innocent way why his fighters had attacked the Twin Towers. And Osama Bin Laden immediately began a long expostulation, hypocritically calling the name of Allah again and again. In short, the Americans were unbelieving and decadent dogs, committing imperialistic politics in the Arabic world with weapons from hell. 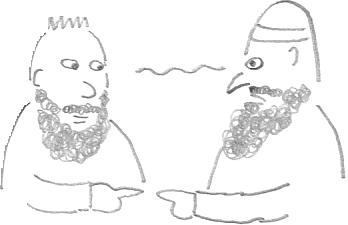 Then a meagre little man came in, with a rather short and thin beard. He spoke in Arabian with a trembling voice and with wide open eyes. Our interpreter whispered that the man was bringing bad news about the advance of the Nothern Alliance.
Bin Laden was furious. He shouted loud orders, and after a little while there came large wild men who brought the poor little messenger to a dark corner of the cave. "He is being beheaded and grinded in the mill for minced meat", Osama crabbedly explained, "Damned are the feet of them that bring the bad news." And after a while we heard an awful scream, and our hearts were trembling with despair.

We had not the slightest inclination to talk again with the tyrant, and were thinking to find an excuse to break the talk off. But then suddenly there was the sound of an eardeafening bang ... A little fat man with a tangled red beard came in. He too spoke in Arabian with trembling voice and wide open eyes. Our interpreter whispered that the man was bringing very, very bad news: the camp where we were now standing had been hit by a big bomb, and American soldiers were attacking from all sides.
Bin Laden was frightened to death. He silently walked to the dark corner of the cave with the poor little messenger, but he immediately came back with unsteady paces. "Who has taken away my mill for minced meat?", he angrily asked. "We eat minced meat tonight." But there the American elite troops already came in. One of those felllows bound the terrified Bin Laden, and another man came to us to cordially shake hands. The Afghan war was over, never to come again.