PETE RICEPUDDING IN THE PURGATORY

Immediately after his decease, the soul of Pete Ricepudding floated through a narrow tunnel to the light. At the end of the tunnel there was a large copper gate that opened itself. There were angels who welcomed him with singing and clangour of clarions. His guardian angel came to him and guided him to a little office, where Saint Peter was working with a computer. The old grey man was guarding a wall full of keys, among which three very large ones: a golden one for the gate of heaven, an iron one for the gate of purgatory, and a wooden one for the gate of hell.
"Indeed ... Ricepuddle ... ", whispered the old man, "Sit down, please". And while Pete was nervously watching him, Saint Peter pushed a floppy disk into the A-drive. The holy door-keeper began peering at the monitor, and the expression of his face changed quickly every now and then. In the beginning he looked softened, then amused, and eventually anxious and frowning his eyebrows. Pete was happy to have his guardian angel next him. The angel was holding his arm on Pete's shoulder, and he encouraged Pete, saying: "Come on, Pete, Saint Peter is always your patron saint ... "

After a few minutes, Saint Peter sighed heavily, and shook his head. He took a little telephone out of his pocket, and asked for "three angels of the Maastricht Mounted Police". At once, three angels entered, each wearing a gas mask. They took Pete in their arms, lifting him up as easily as if he were a piece of paper. Within seconds, they were floating over a plain that was like a desert, and soon they arrived near a large wooden hut that was burning and crackling. The angels floated until they were above the hut, and then they dropped Pete like a stone. 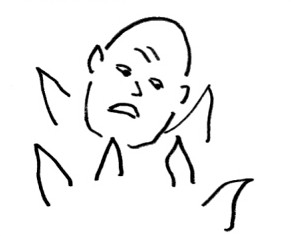 The old cheap sweater that Pete was wearing catched fire immediately, and the flames began to burn his skin. Did you ever seize a burning cigarette at the wrong end where the fire is? Then you can feel a little bit the pain that Pete had to suffer. And how long was this torture going to last? Pete looked left and right of him in despair, where other people were burning like torches as well.

Was he in hell? But no, there were no devils to be seen. And which evil had Pete done during his life? Okay, he had once planned to rob a bank. In his thoughts, he had been threatening the cashier with a pistol, and he had summoned a few ladies who happened to be there to lie down in a corner of the office. But these were only bad thoughts, and he would have given much of the money to the poor. And, okay, he had been a pirate, but this was all confessed and forgiven. Pete felt suddenly so very tired that he could cry ...
... Then at once he woke up. He found himself back in the office of Saint Peter. The old man was looking at him in a friendly way. "Pete Racepudding", he spoke, "you fell asleep. You did not carry out your bad plans, and that is lucky enough. Therefore, your punishment in purgatory was existing only in your dream." Then he took the golden key, and accompanied Pete to the gate of heaven. The heavy gate opened while creaking, and Saint Peter pointed to a sunny spot where Pete was allowed to sit down forever.