When the custom officers at Tel Aviv Airport saw that Pete was only bringing a handbag and a little dog, they let him pass by without closer investigation. The stewardess who gave him coffee in the airplane, was standing at the exit and tipped him an eye when he passed. The sun was shining right above him, the Israeli people were wearing sweaters, and Pete expected that, any moment, a peace dove could come down from the blue heaven.
But instead of that, suddenly an airplane was falling down from the sky with much noise, which violently hit the high tower buildings at the horizont. There was a blinding flash of light, and black clouds began to pollute the skyline that had been clear up to then. Shortly afterwards the sirenes were screaming. People had stood still for a moment, but now they began moving again, and resigned themselves to resuming their activities
Pete bought a ticket in the bus that would bring him to Jerusalem . The little dog was allowed to come along for free, and got much attention and love from the other passengers. They were travelling under the hot sun through dry regions, but there was cold coca cola and air-conditioning in the bus. After an hour they passed a custom house at the frontier near Ramallah, where long rows of Palestinian men and women were waiting for search upon their bodies by Israeli soldiers. This must be done, for almost every day some schoolbus or tourist hotel explodes, only because an Arab walks in with grenades in his pocket and yelling slogans. 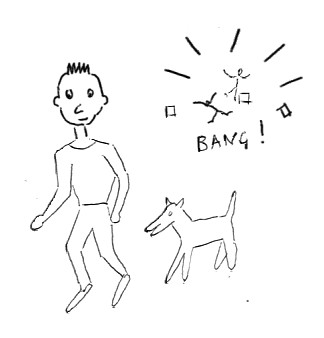 In Jerusalem, Pete first went to his hotel. The old man at the reception didn't talk very much, he looked a bit sick indeed. In the room next Pete's, there was a family with noisy children. It wasn't easy for the parents to keep them in check, and they smilingly asked their new neighbour for understanding. The kids hugged the little dog, and they soon were getting along like close friends.
Then Pete left to walk into the city, in search of Mount Calvary. He wished to see the Road of Passion, where our Lord once walked bearing His cross. He came along colourful little alleys, where Arabs were exposing their merchandise on the streets, and accosted him to promote these goods. A little donkey, bearing drinks, got the attention of the dog and his boss. And Pete asked a little Palestinian girl, wearing traditional clothes all over her body, to show him the way to Golgotha.
Then there suddenly was a heavy blow, and the air pressure blew all people down on the street. Somewhere near them, flames jumped high in the sky, and a scorching smell of fire poisoned the athmosphere. Panic and screaming all around. But the worst of all was .. that Pete's little dog was gone! His sweet true little friend ... gone!
Sirenes were crying, people fleeing, but Pete only searched for his doggy. Where was he hiding himself? Pete looked behind booths and hedges, in yards and behind open doors. He yelled the name of his little dog, again and again: "Stip! Stip! .. "
A policeman crabbedly told Pete to go away. Pete was desperate. Firemen passed by with stretchers, bearing the dead victims of the outrage. Then, all of a sudden, Pete saw his trembling little doggy at the foot end of one of those stretchers, bearing away a dead young woman. It was Stip! He gratefully took the little dog into his hands, and continued his way to the Mount of Olives.