We restrict ourselves to the special case f(x) = ep(x), where p(x) is a polynomial.
In this case, the condition is satified iff p(x) has degree n ≥ 2 and its coefficient of xn is negative, which we henceforth assume.
Then √(1 + f '(t)2) has a maximum on [0,∞), so we need only prove that the product of the integrals ∫0x 1/f(t) dt and ∫x∞ f(t) dt tends to 0 if x tends to ∞.
To do this, we apply the theorems of l'Hôpital several times, and find eventually that the assertion is true if 1/(-p"(x)+p'(x)2) tends to 0 if x tends to ∞.
Since this holds under our assumptions, we are finished in our special case.

It is well known that for odd n > 1 holds Bn = 0. So in these cases the assertion is true.

11722 Let ABC be an acute triangle in the plane, and let M be a point inside ABC. Let O1, O2, O3 be the circumcenters of BCM, CAM and ABM, repectively. Let c be the circumcircle of ABC. Let D, E, F be the points opposite A, B and C, respectively, at which AM, BM and CM meet c.
Prove that DO1, EO2 and FO3 are concurrent at a point P that lies on c.

11723 Let A,B,C be three points in the plane, and let D,E,F be points lying on BC,CA,AB, repectively. Show there exists a conic tangent to BC,CA,AB at D,E,F, respectively, if and only if AD,BE,CF are concurrent.

The assertion is clearly true if A,B,C are collinear, so henceforward we suppose they aren't.
Let a:=BC, b:=AC and c:=AB.

Let j be the conic of lines (conic of tangents) to which a,b,c belong and with contact points D on a and E on b.
Let X be the contact point of j on c.
According to the theorem of Pascal (or Brianchon), applied to ((abc)(cab)), the lines a.a-b.c = DA, b.b-c.a = EB and c.c-a.b = XC are concurrent at a point P.
This point P must be DA.EB, so X is the intersection point of PC and c.

Now if DA,EB and FC are concurrent, then PC.c = F and the conic J with corresponding conic of tangents j satisfies the conditions.

On the other hand, if there is a conic J that meets the conditions, its corresponding conic of tangents must be j, and according to Pascal (Brianchon), the lines DA,EB,FC are concurrent.

I ran the following pascal program:

It seems the outcome tends to the well known transcendental number e = 2.71828...

See the following figure. Here a and b and γ are given, and we have to construct c. 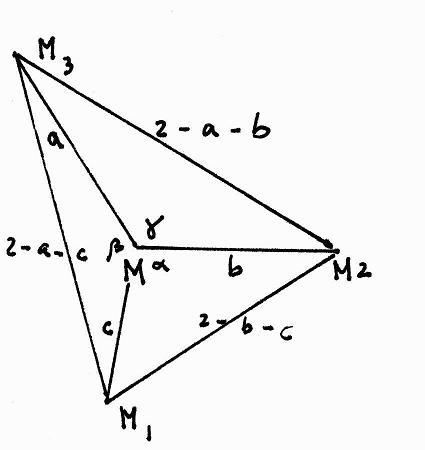 This can be done as follows:

11731 The integer simplex with dimension d and side-length m is the graph T(d,m) whose vertices are the non-negative (d+1)-tuples summing to m, with two vertices adjacent when they differ by 1 in two places and are equal in all other places.
Determine the connectivity, the chromatic number, and the edge-chromatic number of T(d,m) (the latter when m > d).

11737 Given an acute triangle ABC, let O be its circumcenter, let M be the intersection of the lines AO and BC, and let D be the other intersection of AO with the circumcircle of ABC.
Let E be that point on AD such that M is the midpoint of ED. Let F be the point at which the perpendicular to AD at M meets AC.
Prove that EF is perpendicular to AB.

Now, using trigonometric identities, it's straightforward to show that the inner product of the direction vectors of EF and AB is zero.

11738 Three point particles are constrained to move without friction along a unit circle. Three ideal massless springs of stiffness k1, k2 and k3 connect the particles pairwise.
Show that an equilibrium in which the particles occupy three distinct positions exists if and only if 1/k1, 1/k2 and 1/k3 can be the lengths of the sides of a triangle.
Show also that if this happens, the equilibrium length L1 of the spring with stiffness k1 is given by L1 = √(k2k3) √((1/k2 + 1/k3)2 - 1/k12).

From the last assertion it is clear what L2 and L3 should be. We will try and prove only this second assertion, because it clearly implies the first one.

I think the values of these sums, involving zeta functions, can be found somewhere in the mathematical literature.