PETE RICEPUDDING AS A MUNK

When Pete Ricepudding was still a boy, he was very much moved by the stories that his schoolmaster told about the Catholic Mission among the Red Indians in seventeenth-century Canada. The French Jesuits Jean de Bréboeuf and his companions died there as martyrs by the hands of the cruel Hurons who had just been christianized by these Jesuits. Pete then decided to become a missionary.
His father did not like this plan, but Pete's mother accepted the sacrifice with joy. A few weeks later on, a Carmelite priest came to visit him and test the rigidness of his vocation. He left a picture with a little prayer, which asked God for wisdom in the question whether or not to accept to be chosen by God.

In the seminary, a severe discipline prevailed. There were four hours of study in silence each day, under supervision of an elder student (the censor). When eating bread, you could butter it in only one way, sometimes dirty scraps of yesterday. The students of the sixth year (the 'rhetorica') were allowed to smoke big cigars, while the little ones of the first year (the 'little figure') could only smoke small cigarilloes. And, of course, one had to attend Low Mass and High Mass, morning- and evening prayer, and there was confession on saturday and benediction on sunday.
But Pete felt perfectly at home in this world. His marks were high, and he summed them all up in his letters to dad and mum. He liked the order and regularity. He felt safe in the climate of the Roman Catholic Belief. 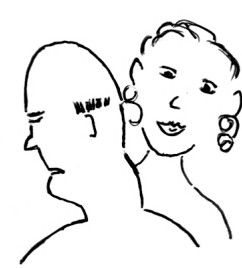 You can read in the other little stories about all that happened with Pete when he was a young man. They say he was a pirate and a footballer, to mention only a bit. He erred far from the small path that leads to heaven, to rejoice with the pleasures on the broad way to hell.
But you won't be surprised to hear that there came a fine day when Pete found a little book that changed his mind. It was about the French nineteenth century Saint Charles de Foucauld. This man had settled as a hermit among the hostile Islamic Bedouins. Now the Spirit seized Pete again, and he joined the Zundert Trappists to devote himself to the virtues of convent.

There are three Evangelic convent virtues. First Obedience, that makes you leave your shortsighted wishes and listen to the wide visions of your superiors and obey the will of God. Second is Chastity, that makes you direct your thoughts to prayer instead of the vulgar joys of earthly life. Third is Poverty, which makes you give up your material sorrows like the sparrows in the field, and be content with the crumbs that fall from the table.
But you have to be apt for a life like this. Some force themselves to this kind of life, sometimes leaving a life that would have been better for them. Others are naturally apt for convent life. But not Pete: he saw among the charwomen a girl that laughed so charmingly that his vocation melted away like snow in the sun.