Coca Cola had designed a publicity stunt: three precision-bombers would each throw a little Christmas present from the air into the house of an important personality , while the image of Santa Claus would be projected against a smoke-screen in the sky. Intensive television campaigns would announce the happening a few minutes before.
Pete Ricepudding was requested to lend his image to Santa Claus. This was of course a surprise to Pete, but he remained very cool. He made the condition that he would select the three presents and personalities. Coca Cola was glad to hear that Pete Ricepudding would do this job too.


On Christmas Eve, three bombers took off at the same time, each equipped with the present, the smoke-machine, the precision-artillery and the video-apparatus. And in three distinct countries, the commercial television programs were interrupted by the Coca Cola advertisement that announced the coming event quite clearly. But the names of the three personalities who would receive the presents were only vaguely indicated.
The first present was for Pete's vicar in Maastricht. He was praying in the Chapel, when suddenly a cylindric parcel fell near him on the ground. He opened the parcel with trembling fingers, and was highly surprised when he saw the content: a pin-up poster, reproducing a very beautiful girl in bipartite bathing-suit! He looked at the photo model and frowned, while his ears were blushing. Then he went to his office with the poster, and he threw the poster in a cutting-machine to cut it up. 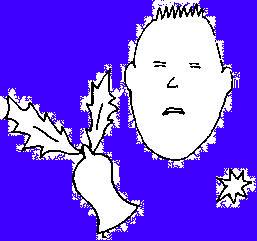 The second present was for Saddam Hussein. He was holding a meeting with his military staff, when the christmas parcel fell on the table. The military men were terrified and gave way, but Saddam knew what was going on: that Cola stunt. He gesticulated that the parcel should be examined with the detection-apparatus. As soon as this had been done, he himself opened the parcel. Suddenly there came a dismal smell from the parcel, like from rotten eggs. They hurried to throw the parcel into a fire to burn it, but the smell became even more dismal. Those people have stunk so badly that one could smell it from outside the building, during the whole day, but nobody dared to complain.
The third present was for the Chinese government. The parliament was holding a meeting, when suddenly almost hundred parachutes were blown into the hall through the large open windows. Every parachute carried a wonderful little baby girl. As soon as the administrators had come to themselves, they all felt a lump in the throat. Some began crying, and soon everybody was cuddling the babies. Clean napkins had been delivered together with the babies, and many administrators began to give the babies clean napkins .


The image of Pete Ricepudding as Santa Claus had been projected against a smoke-curtain in the sky, in the three places. There was no sound, but people found little papers of Coca Cola everywhere.
In Maastricht, people never heard what present the vicar had received. Some said that it must have been a message from heaven. In Irak everybody knew within few hours what Saddam had received. But the newspapers told that the smell that Saddam had beamed forth had been caused by the mother of all perfumes. And in China they said to the assembling people that henceforth newborn girls should be welcomed with as much care and joy as the little boys. Otherwise, the evil-doer would be rebuked in public.