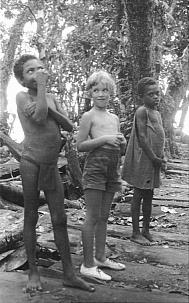 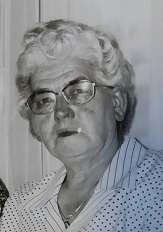 My aunt Annie, an elder sister of my mother, was a bossy type. Whenever I visited the house where my mother grew up, she would give me some work as soon as I entered. "Hello Hennie", she would say to me, "you can wash up the dishes", or "you can gather apples in the garden".

My father wouldn't escape from her, either. She once stayed with us for a few days, and told my father he should wash up or clear away or lift his feet or whatever. And my father was the man in the house, in the old-fashioned way. He considered shooting aunt Annie, but not really.
I remember she slept with me in my own bed, since there was no other bed. She took so much of the space in my bed that I ended up on the floor.
She also gave my elder brother and me a rosary, and we had to practise praying the rosary with her immediately.

I guess she didn't really enjoy her heavy task within the large family. She would rather have studied history, but she had to nurse my grandparents and help her younger brothers and sisters. Her brother Joseph, my uncle Jos, needed much care, because he was asthmatic.
On her 65-th birthday, there was a great feast in the parental home where she still was living with uncle Jos. 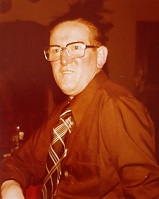 My uncle Jos, a younger brother of my mother, was a very friendly man. Whenever, as a child, I visited the house where my mother grew up, together with my brothers and sisters, he would play some games with us, like Pim Pam Pet or Tic Tac, so we had to seek a hidden clock or a hidden coin.

He could play a musical instrument, called melodica, very well. Once I joined a bus pilgrimage wherein he played his melodica while we were singing some merry songs like 'Oh my darling Clementine' or 'Es gibt kein Bier'.

Uncle Jos was asthmatic, and he would go to the swimming pool on his bike to improve his health. Once I joined the exercise and the weather was as cold as the water. On our way back home, he entered a bar to take a glass of gin. I had to promise I wouldn't tell this to aunt Annie.

In 1963-1964, when I studied in Merkelbeek, I would walk to aunt Annie and uncle Jos and grandpa and bring my wash. I would bring my friend Rinus as well. Grandpa once complained there was nothing in the newspaper, so I recommended the sport. Then uncle Jos played on the piano: 'Wie sjoen us Limburg is' ('How beautiful is Limburg').

I think uncle Joseph was rather gay, but he never embarrassed anybody.