PETE RICEPUDDING AND THE INDULGENCES


One evening Pete Ricepudding applied to his patron saint Peter in prayer. He asked whether his mother had a good spot in heaven, close to Our Lord. But he had walked a long walk over the hills, so he fell asleep before he had finished his seventh Ave Maria.
Then saint Peter appeared to him, and said with a worried face that he had a bad message. In accordance with an old law, the so-called '1843 couple law', all indulgences obtained after 1964 in All-Souls' Day visits would have to stand a new test. If necessary, they would lose their validity with retro-active effect.

We have to explain a few things to non-catholic readers. An old tradition demands that people visit churches on All-Souls' Day, to earn indulgences for the souls in purgatory and shorten the time they have to stay there. Some Catholics are very eager to walk in and out the same church again and again, to make more visits and earn as many indulgences as possible.
The couple law proclaims that the indulgences are valid only if the visitor says the prescribed prayers with a sufficient degree of attention. A scambed Hail Mary doesn't count. 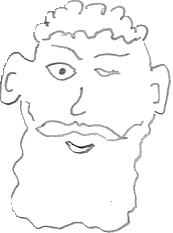 Pete was afraid that, of all the prayers he had said in favour of deceased family members, very few would stand the test. And he knew that some of these family members, especially his favourite uncle who had lived in Spain, could use a bit of earthly support.
He was perplexed and said to saint Peter that he had reckoned with the validity of the indulgences in full faith. They should not be declared invalid after so many years. He would appeal to saint Michael or even, if necessary, to Our Lord Himself.
But while his anger grew worse and worse, saint Peter shook his head with sorrow.

When Pete awoke, he was wet with sweat.
He kept laying down for a while to think, but before long a smile appeared on his lips. For he remembered the psalm that sings about God's mercifulness: " If you count our sins, Lord, who will stand your trial? But thine is forgivingness ... ". God is not an unyielding functionary nor a miserly grocer.