3) In the convex quadrilateral ABCD we have ∠B = ∠C and ∠D = 90 degrees. Suppose that |AB| = 2|CD|. Prove that the angle bisector of ∠ACB is perpendicular to CD.

3) Suppose we have 4n stones with weights 1, 2, 3, . . . , 4n. Each stone is colored in one of n colors and there are 4 stones of each color. Prove that the stones can be placed in two piles A and B such that the following two conditions are fulfilled:
one: the total weight of pile A is equal to the total wight of pile B,
two: each pile contains two stones of each color.

I simulated and counted the operations of Harry for many random initial configurations with n ranging from 1 to 100, using a Pascal program.
It turns out the average number of operations is n2/4 + n/4 + 1.

I think initially the network must consist of two groups A and B such that A has 1010 members and B has 1009 members and every member of A is friends with every member of B, whereas two members of A are never friends and two members of B are never friends.
Now if a event of the described kind happens, the number of friendship relations becomes one less. I ran a Pascal program to repeatedly simulate such an event at random. It begins with 1010*1009 friendship relations and ends with 505 friendships relations.

2) In triangle ABC, point A1 lies on side BC and point B1 lies on side AC.
Let P and Q be points on segments AA1 and BB1, respectively, such that PQ is parallel to AB.
Let P1 be a point on line PB1, such that B1 lies strictly between P and P1, and the angles PP1C and BAC are equal.
Similarly, let Q1 be a point on line QA1, such that A1 lies strictly between Q and Q1, and the angles CQ1Q and CBA are equal.
Prove that points P, Q, P1, and Q1 are concyclic. 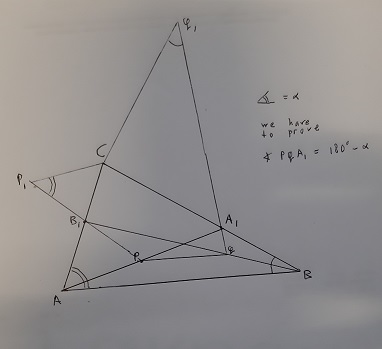 Equivalently, let d = gcd(a1,an), a = a1/d, b = an/d, so a and b are distinct relatively prime positive integers.
We have to prove that ab doesn't divide a2 + b2.
Since at least one of a and b must have a prime factor that doesn't divide the other, this is evident.

I think the best strategy of the rabbit is always jumping away from the hunter in the opposite direction, so I wrote the following Pascal program:

However, it's more realistic to assume the probability density f of the distance between the rabbit and the spot the hunter runs to is not constant with f(0) = f(1) = 1, but linear and descending with f(0) = 2 and f(1) = 0.
In this case we have to use, instead of mu:=random, mu:=1-sqrt(random).

I ran the adapted program and found the rabbit escaped after 8115418 jumps.

3) Let ABCD be a convex triangle with right angles at B and D. Let H on BD be such that AH is perpendicular to BD.
Let S and T be points on AB and AD, resp, such that H lies within triangle SCT and the angles CHS and CHT are 90 degrees greater than the angles CSB and CTD, resp.
Prove that the circumscribed circle of triangle STH is tangent to BD.

1) For any set A of four distinct positive integers a1,a2,a3,a4 let sA be the sum of the elements of A and nA the number of pairs {ai,aj} of its elements such that ai + aj divides sA. Determine the sets A such that nA is maximal.

4) Let n be a natural number. We have a balance and n weights with masses 2i, i=0,..,n-1. We want to lay all weights successively on the balance, either at the left side or at the right side, in such a way that the right side is never heavier than the left side. In how many ways can we do this?

International Mathematical Olympiad 2001 (Allegedly, no solution has been published up to now.)

The possible values are β=60 and β=30 only. This can be proved as follows:

Let p:=sin(β/2). We use the wellknown goniometrical formulas and take squares to eliminate roots. Then we get a polynomial equation in p of degree six.
Since p=0 and p=1/2 (corresponding to β=60) clearly are solutions, we can divide by p and 2p-1. Thereafter we have:

After a numerical exploration up to 10 decimal places we guess this equation has no other solution than the one corresponding to β=30 and (hence) p=(√6-√2)/4.
For this value of p the left hand side is exactly zero.
Analysis of the derivatives shows that there are no other zeros of the left hand side between 0 and 1.