When Pete Ricepudding was still a student, he once saw a beautiful girl. Indeed, he never had seen such a pretty girl before. He stepped up to her without delay and they agreed upon a conversation at her place. He went to her house on his bike, and brought a bunch of red roses. They had a chat about the Beatles, the pope, students' life, and many other subjects.
Three weeks later, she visited him unexpectedly, wearing a training suit. She was lucky to find him at home, because it was a nice day to go outside. Pete had just put on a record of Joan Baez singing an evergreen song with the following lyrics: "... So come, all ye young lovers, take a warning from me, and never hang your affections on a green growing tree. For the leaves they will wither, roots will decay, and the beauty of a young maid will soon fade away, oh! soon fade away ..."
Pete opened the door to let her enter, but he had already laid the warning to heart. He made, just for her, a cup of lukewarm instant coffee and switched the television on, so they could see the news together. When she left, Pete said he didn't like women's sports very much, because the women that resemble men are most likely to win. For similar reasons he didn't like sports for handicapped people. Those who are less handicapped have more chance to win. While Pete was still making his point, the visitor left his apartment without saying a word and walked away in her sporting dress without looking backward. 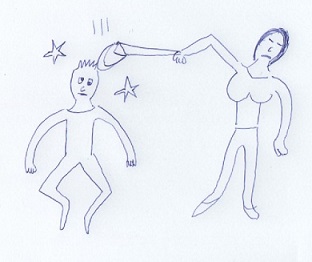 The years passed by. Pete grew up and became a sensible man, equipped with many sensible sayings of his father, like "Strike the iron while it is hot", "Prudence is the mother of wisdom", and, above all, "Friendliness is free". He was really interested to hear the stories of everybody who crossed his path and asked for his attention.
One day he suddenly saw his old flame again when watching a peace march she was participating in. It had been a very hot day, so quite a lot of sparrows had fainted and fallen from the roofs. In the sultry evening, Pete was letting out his doggy and bumped into the demonstration. At some moment, he saw his lost girl friend again. She looked rather shaky, as if the war was already very close to her.
To encourage her, Pete quickly jumped in front of her, and tipped her a wink in passing. But she didn't receive it favourably. When he was going away after the event, she suddenly came after him, and gave him with her handbag a blow on the head that made him see stars and planets.