You may fall asleep while watching tv, that may happen to anybody. But Pete Ricepudding began naming his pretty neighbour's wife by several strange names, so Pete's wife supposed he was becoming demented. One time he called the neighbour's wife 'Anita', another time 'Monique' or 'Sabina', while the real name was 'Petra'. That was the beginning. Later on, he didn't even know the names of his own children.
As long as nothing peculiar happened in the daily routine, Pete seemed to maintain himself pretty well, though with a bit of searching and trying. But when the shop in the street had to close forever, Pete could never find the way to the new shop in a street nearby. He always lost his way, and came home with wet trousers. So his wife began to look for a place in the home for sick aged people.

The closed floor of the 'Garden of Eden' was very pleasant. It was an old house, where many patients slept in rooms for two persons. In the common room, the inhabitants were sitting together at large tables. There was tv, there were canary birds, everybody had enough coffee or lemonade. The nurses were walking around with big smiles on their faces, and they were very friendly for the demented aged people.
Two good-humoured inhabitants seemed to be friends, and never stopped walking from one closed door to the other. There was also an old lady who always asked for a clean bib, although her bib was very tidy all the time. And Pete Ricepudding asked for coffee again and again, so his cup was never empty. Thus Pete was often sitting contented at the table, softly singing an old hymn of virgin Mary. 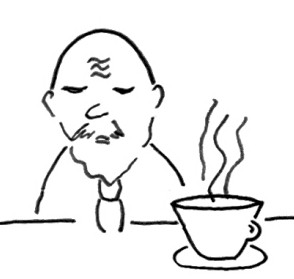 Whenever there were visitors for him or for anybody else, Pete rose up from his chair and solemnly introduced himself, heartily shaking hands with the newcomer: "Good day, mister (or madam), my name is Pete Ricepudding. Welcome in the Garden of Olives." People would suppose that he joked, saying 'Garden of Olives' instead of 'Garden of Eden', and they would gaily laugh. In the rebound, Pete would naughtily pat any nurse that stood near him. This nurse would say with a stern face, but almost smiling, that he should behave better.
Of course, Pete's wife and children came often to visit him. Then they would bring something that was dear to him, an old photograph or a favourite book. And they would go walking with him, or drink a glass of beer. If Pete wanted to join them when leaving to go home, they always said that he should tell the nurses about good old Maastricht. Then his face would brighten, and he forgot that the wished to go home.

But, one day, Pete had disappeared. He probably slipped out together with some visitor. Anybody who didn't know Pete, could easily think that Pete was a visitor himself. The nurses immediately began to seek Pete, and they warned the family that he had escaped.
They looked for him in his favourite city pubs, but he wasn't there. They looked for him in the recreation-ground 'Fortress William', but he wasn't there. They combed out the city park, and even the near hill called 'saint Peter's hill', for you can never know how far a demented man can walk away. Not a trace. Days went by, and Pete's photograph had been on tv and in the newspapers. Finally, after a week, there came a postcard ... greetings from Paris. There was no sender on it, but it was neatly addressed to Pete's wife, and clearly written by Pete's own hand.