The old age comes with infirmity. If you are sixty you can manage it, but Pete Ricepudding was ninety years old and a real bungler. One evening of a hot summer day it suddenly began to rain and to blow. People asked where grandad was. They found him in the garden, shivering in his rocking-chair, under a sopping wet blanket.
That night Pete began to cough. He got a high fever and he was wandering in his mind. A certain mister Hendriks seemed to be seated next his bed, pointing a pistol at him. "Do away that thing, mr Hendriks", the old man said with a tired voice, "or else it can go off by accident". Then there came an awful fit of coughing.

The doctor came and found a pneumonia. For such an old man that is no cat's pee. Granddaughter Julie went to warn the parish priest. He came with an altar boy to administer the last sacraments. "Who the hell was this mister Hendriks, Pete?", he asked. But the old grey man was already softly sleeping.
The next morning he felt much better. He even wanted to rise up to take a little walk in the garden. He asked Julie to bring him a cup of coffee and a rusk with jam. He shivered while taking a small draught, and didn't touch the food after that. Three years old Kevin came to give him a little kiss, and Quick the dog lied down on his bed. But in the afternoon it turned out that Pete was suffering a lot of pain. 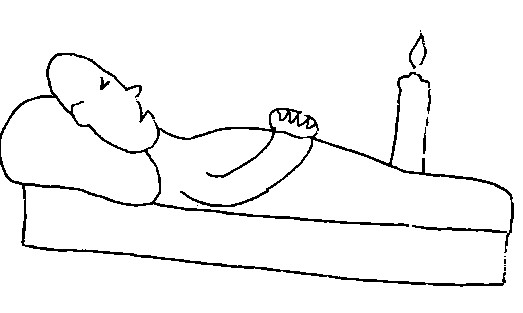 "Why is grandad so white?", asked Kevin, and Julie went into the room, holding her breath. There Pete was lying on his bed, motionless, his eyes closed. Was he .. ? Emotions took possession of Julie, and she intended to sneak away and give her housemates notion of grandad's decease. But then Pete moved his hand ...
He opened his eyes, and softly said: "Julie ... Julie, why are Palestines committing suicide in the cities of Israel, dragging tens of Jews with them into death?" He looked at his granddaughter. With tears in her eyes she shook her head, to notify that she didn't know the answer. Then Pete Ricepudding heaved a last sigh. His mouth fell open. His eyes were gazing on nothing.

Julie ran out of the room and warned her housemates: her husband, who came home that very moment, her mother Jeannette who was seated in a wheel-chair, and the kids Kevin and Wendy. Little Wendy was five years old, and had been playing in a corner with a doll-house. Now they all came together in the death-room, where Pete was still lying in the same position. Julie lighted a candle and closed the shutters and the windows. She stopped the hands of the large standing clock: it was exactly five o'clock in the afternoon ...
But then suddenly the old man began to move. He sat upright, trembling in the act. He looked at his family, one after the other, a vague smile on his lips. "I am going to leave you, my children", he said, softly but clearly. "We will all meet again in heaven ... "
He fell back in the cushions, and closed the eyes. Then his mouth began shaking. It seemed that he intended to say something more ... "Julie .. ", he said. " .. the Jihad .. the holy war of the Islamites .. they make that poor guys believe that such an act of suicide ... ". He looked at Julie with sad eyes. " .. That those acts of terror will immediately bring them to paradise ... "
Then he closed his eyes for good.