The career of Pete Ricepudding was capricious, that's true, but it certainly wasn't boring. He himself didn't exactly know what he had done during all those years. But one episode stood so clear in his mind that he could tell about it with exactitude, if we would ask him to do so. One beautiful night, it was Saint Michael's evening, we were sitting in the verandah, and he told about it:

I was a reporter for the New Amsterdam Newspaper, which delivered the first issues in 2025. They sent me to Naples, where the meetings of the Third Vatican Council took place in some country-house of pope John Paul the Fourth. The cardinals were walking along the Bay of Sorrento, dressed in stylish black and purple suit or gown.
I talked to a cardinal with a long black beard. "What is going on, eminence?", I asked. He tipped me a wink, and laid his finger on his mouth. "Something very controversial, my dear!", he said. "We are preparing a constitution on Liturgy. There are many cardinals who want to make liturgy free altogether." He looked at me with a satisfied smile, and continued: "Let every parish fill in its own liturgical happening. If they want a cup of coffee instead of a bowl of wine, well, Jesus could have used coffee as well."
We bought a plastic cup of coffee in the kiosk and silently drank it, impressed while thinking of the hidden possibilities. I offered the cardinal my tissue, and he was very grateful for it. It was a wonderful evening. Tens of stars were visible in the sky, while youngsters passed by with their pocket telephones, and we heard the far noise of a disco ... 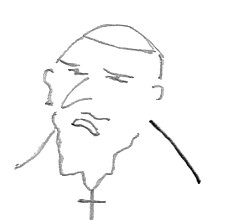 "What about that dogma on Eternal Life?", I asked, when I came back from the basket for empty plastic coffee cups. He smiled and laid his hand on mine. "Well, that is not really a difficult topic. We all know what happens when we die: thou art dust, and dust you will become again!" I almost fainted with surprise, and stammered: "But eternal life ... ". "Doesn't exist", the cardinal solemnly said. "We don't live on as a person. The Church will finally have to admit that."
It lasted one hour before I had recovered from the shock. It was clear that a tradition of twenty centuries had been thrown away. At last I dared to wake the cardinal and ask him a new question.
"Eminence! Is there no opposition against this standpoint?" He kindly looked at me. "Yes, of course", he slowly said, "there are archaic persons who have no idea of history or any sense of a living tradition." He shook his head, and continued in a sorrowful tone: "We cannot bring them to reason, and they themselves are voluntarily going into schism." We arose and walked back to the city center.
"Don't forget", he spoke with a warning finger, "the pope decides in all matters, even if he were the last of the Catholics."

(We and Pete hope that this story never will become reality.)