PETE RICEPUDDING AND THE CORONA CRISIS


Everybody wants to know what Pete Ricepudding did during the Corona crisis. Because in those days the dragon with three heads, Corona, was bullying all of us with his voracity. We had to stay at home for safety. In the garden of the royal castle Drakensteyn, every day at four o'clock, the true lackey Johannes would appear to solemnly communicate how many frogs the monster had swallowed during the past day. Two meters behind him, the maidservant Agatha would tell the same in sign language for the hard of hearing. We all were hoping the numbers would fall off, because our queen Maxima was fond of the green little frogs.
Meanwhile, our king Willem Alexander, after consulting the experts, had invented a plan to control the situation. In a speech on television, he promised each young man who would cut off a head of the dragon with a sword of the late prince Bernard, which was lying ready on a little table, would be allowed to marry one of his daughters: the first one princess Amalia, the second one princess Alexia, and the third one princess Ariane. Moreover, the brave young man would obtain a couple of provinces: the first one Limburg and Brabant, the second one Groningen and Friesland, the third one Flevoland and Zeeland. 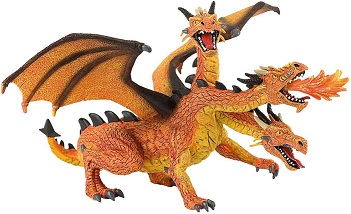 Pete Ricepudding went to the royal castle immediately. There the dragon was spitting fire in his cage of white concrete in the open air. The royal family was soon sitting ready on the tribune that had been constructed for the occasion. The experts thought the chance that Pete would stay alive was about two percent, so the princesses didn't worry very much.
But where was Pete? The king's daughters were getting impatient, and yawned at ever shorter intervals. At once the door of the cage opened. Within a few seconds, a white glove caught the sword of prince Bernard, which was lying ready on a red little cushion. Whose hand was that?
Nobody saw Pete, because he wore a white camouflage suit. He settled somewhere in the cage of the dragon with a large supply of white milk and white cheese, and stayed sitting there for seven weeks to await the best moment.
The right moment came unexpectedly, when the dragon had eaten too many frogs. The monster lay down, and now one of his heads lay close to Pete on the concrete floor. So it was easy for our hero to cut the head off.
However, he didn't marry Amalia, because he knew she preferred to marry a leftist intellectual. Therefore Pete only got the two carnival provinces of Brabant and Limburg.