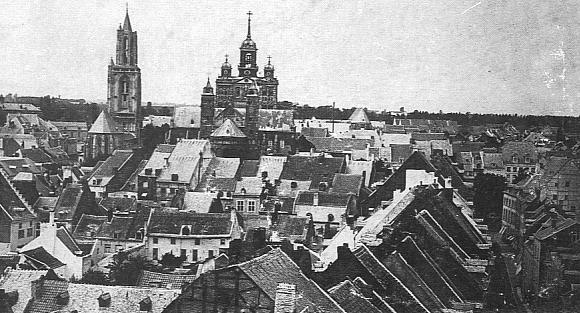 Monique's aunt Nicolette was a 'typical' Maastricht lady. And could she tell stories! After she had put me in a lazy chair, and provided me with coffee and chocolates, I listened all night long. I'm not normally a night-reveller, but now I forgot what time it was and could only say goodbye to the aged lady when it was already way past midnight.
She told about her father, a baker who used to bear the banner in the processions and to sing the Tantum Ergo at the top of his voice. She also told about her mother who fled from Belgium to Maastricht in the First World War, creeping underneath the electric fence at the frontier. - What a courage! The father of her mother looked like a Greek god, and would bring marlstone to Maastricht with horse and cart. The other grandfather would sell Singer sewing machines throughout Limburg. This grandfather had a lovely bass voice and a long beard. He was singing his beautiful German songs even on his death bed.
Aunt Nicolette inspired me to research in the archives of Maastricht and Limburg. This way I learned that the plateau of Margraten was only populated in the second half of the middle ages, when there was no more room in the valleys. I cycled to the monastery of Hoogcruts near Noorbeek where you can still feel the olden times. A greatgrandfather of Monique's was a servant there. I realised that the ancestors of typical Maastricht people like Monique's aunt were once new in Maastricht. They stayed expats for quite a long time. Because Maastricht people from the old city center often denounced people from the countryside as 'farmers'.

As a child, Monique's mother Isabella lived at the Market place, where the greengrocer's wives from Sint Pieter and Vroenhoven would sell their vegetables. The parents of Isabella also originated from the little villages to the south of Maastricht, in the valley of the river Jeker and on the hills of Sint Pieter and Wolder. I discovered there were close relations, up to the nineteenth century, between the greengrocers from Sint Pieter and the inhabitants of the Boschstraat and its neighbourhood. The latter were representing the former inside the city walls. This only changed when the pottery king Regout began to buy the houses in order to replace them with barracks for his own workers. The neighbourhood impoverished in those years, and the people had to deal with cholera.
No wonder that the Maastricht people broke down the oppressive city walls and built the Villapark outside. However, these walls often have offered protection to the people of Maastricht and its surroundings whenever some army besieged the city. In times of war, people preferred to live inside the city walls rather than in the countryside, because the enemy would demolish any house that happened to lie in the field of fire of their cannons.
As for weapons: near the watermill of Lombok in Biesland there was a factory of guns in the nineteenth century. It sprang from the Liege weapon industry. This way, the war brought work and income to some Biesland people, although it usually would bring only taxes and quartering and contagious diseases. 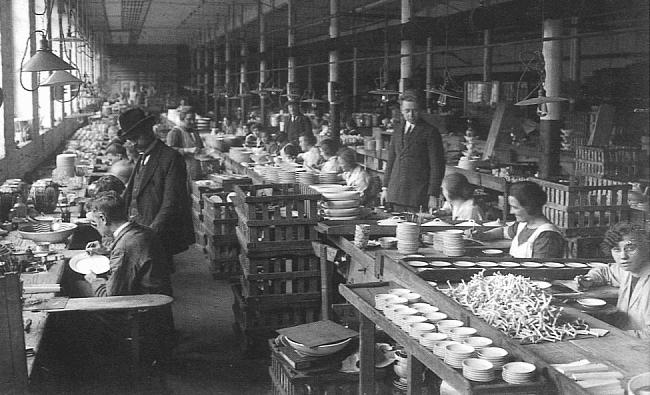 Among the names I found when looking for Monique's ancestors there's also the name Tilly. This name is famous. At the spot where the Brusselsestraat passes into the Grote Gracht, there is a building of the university that elder Maastricht people know by the name of 'hof van Tilly'. Here, in times long ago, consultations took place between the representatives of Liege and States governments of Maastricht. The house was built for a count Tilly who was governor of Maastricht in the pigtail period.
The most famous descendant of the Tilly lineage was Johan 't Serclaes, count Tilly. During the war of thirty years, he served the Holy Roman Empire of the German Nation as a general. He may be a grandfather of one captain Tilly whose grave was in the former church of Saint Nicholas on the present Onzelievevrouweplein. Later on, among the bearers of the name Tilly there are both soldiers and gardeners, all living in the Boschstraat and its surroundings.
So it's possible that there are some counts of Tilly among Monique's ancestors. But, even if this is the case, the descendance was never accepted. Indeed, Monique's ancestors didn't belong to the High Society. Her grandma was born and bred in a simple house near the Jeker mill of Lombok. She married a simple cab driver whose father was a simple engine driver with the Societé Céramique. Nevertheless, their daughter, Monique's mother, looked very posh. She could easily pass for some Spanish photo model. 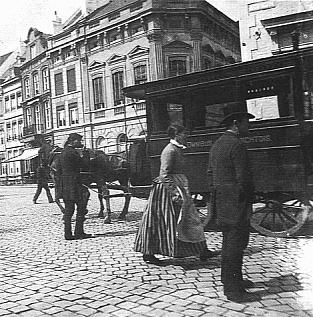 I also searched for the ancestors of another winsome lady, called Sabine. Her uncle Pierre was, long ago, a functionary with the provincial administration of Limburg. He enjoyed life like a Burgundian, and thus he was in harmony with the stereotyped image of people from Maastricht that's current in the rest of the Netherlands. He often travelled with the Dutch national football team as 'chef de mission', because the directors of the Royal Dutch Football Association had noticed he could give guidance in a pleasant way.
The ancestors of Sabine in the paternal line come from the village of Geulle. The first steam train passed there in 1865, and attracted a great deal of attention. It was a sign of the progress Limburg needed. Indeed, aged people remembered the times of superstition, when the presbytery of Geulle was haunted in the oldfashioned way. Gin distillers and salt smugglers gratefully abused the situation. When they were in danger of being caught, they played the ghost.
The earliest ancestor I found in this branch of the family was a miller of the Geulhem watermill at Berg en Terblijt. The miller served food and drink, and, ever since, his descendants have been running diverse hotels and restaurants in southern Limburg. The Geulhem watermill is still a popular tea garden in the beautiful vale of the river Geul. From the pavement you can see the well-kown dwellings-in-the-marl. 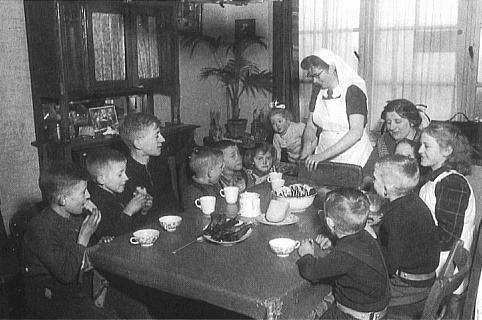 Sabine used to call her maternal grandmother 'bomma'. The first part of this name is the French word 'bon', which means 'good'. This suited the grandmother, who raised fifteen children herself. It was in the palmy days of Roman Catholic life. For instance, in 1947 the whole of Maastricht was intensely involved in the festivities in honour of virgin Mary. One of the daughters became a nun: she was carried off to Brussels in a car with blinded windows. On the card in rembrance of bomma, the image of virgin Mary 'Star of the Sea' is shining.
Bompapa ran an upholstery in the Wolfstraat. His ancestors had made a little fortune as taylors. They manufactured clothes for soldiers. This already began in 1750, when the first of these ancestors took the oath as a new citizen of Maastricht. He was born in 1711 in the Flemish-Brabant village of Hoeleden, and had joined in the gigantic battle of Maastricht at Lafelt in 1747. Now he was going to sell cloth in Maastricht, to manufacturers of clothes for soldiers.
The fifteen children of Sabine's bomma used to play at the Onzelievevrouweplein. However, they were not allowed to play in the Stokstraat. There, the poor children were living, who might contaminate you with lice and other filth. You had to pray for them and you could save pennies for them, but you were not supposed to play with them. There were separate schools for the children of high, middle and low classes. 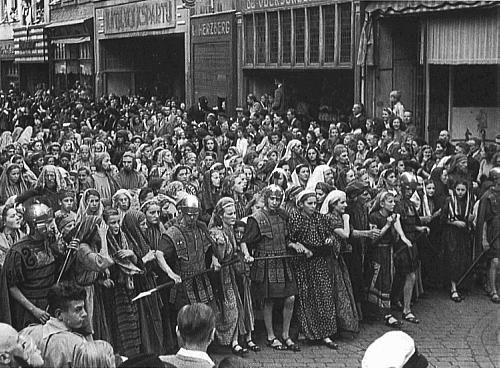 Prussians in the family

We saw above that some of Sabine's ancestors came to Maastricht from Hoeleden in Flemish Brabant. Other ancestors came from the region of Liege: Petitjean is their name. We have to face the fact there lived in Liege an infamous poisoner called Petitjean, but I'm sure she wasn't closely related to the ancestors I searched for.
German speaking countries like Prussia and Bohemia contributed to the DNA of Sabine as well. One Bolms from Gardelegen was a grandfather of Bomma. He was a factor of a steam boat company, and settled in the Grote Gracht at number 51. Later on, he lived in the Bouillonstraat. His wife came from Bohemia, today Czechia.
We conclude: each city is populated by people whose ancestors have once settled there as foreigners. For such a foreigner it's not always easy to become an accepted citizen of the new city. Your tongue or the colour of your skin shouldn't hinder this process of integration. There's hope, though: keep in mind that, a hundred years ago, Maastrichtse carnival was organized by a certain Alphonse Olterdissen: a Protestant with a German father and a mother from the province of Zealand! 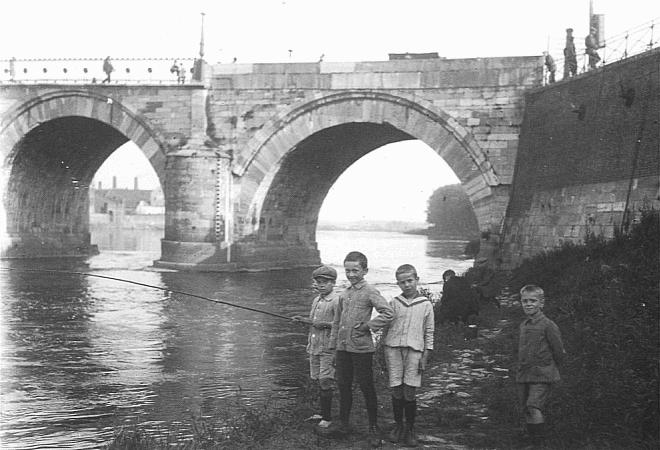