The ancestors of Karel Hendriks

The first Hendriks we know in the family tree of my father-in-law, the unforgettable Karel, was a Prussian and a Catholic. On the 25-th of November 1695, his marriage took place in the little church of Oud-Zevenaar in the Lymers region, which was Prussian until 1816. The village Zevenaar began its existence on an old Rhine bed that had become dry. Its name comes from the seven hairs of virgin Mary that were there preserved as relics, although some dry old sticks maintain the explanation of seven ears of corn. Every year, people in Zevenaar used to chose a local king and queen of the guard.
In the Oud-Zevenaer book of marriage, it simply says: Anno 1695 juncti matrimonio Gisbertus Henricks et Henrica Dryse. This good married couple got a son in 1704, and called him Anthony. Whether they had any more children, I don't know. They probably had, and it is easy to check this.

Anthony must have been an active young man, for he moved to Amsterdam with his old father. They lived there in the street called 'het laantje', on the corner of   'steeg ... '. I don't think that life was easy for them. But, nevertheless, Anthony Hendercksen made an impression on a young lady who lived in the decorous street 'Keizersgracht'. She was born in Borga, the Dutch commercial colony ter Burcht in Finland. Her name was Geesje Wijnands. When the enamoured two married, in Amsterdam on the 20-th of October 1729, the father of Anthony was there to witness, but the parents of the bride had already died. I don't know which craft Anthony did. He may have been a shoemaker or a taylor, like some of his offspring. On the 23-d of July 1741, they had their son Gisbertus baptized in the Amsterdam Roman Catholic church 'het Boompje'. This Gijsbertus was an ancestor of our Karel.

Before I continue, I have to say something about the phenomenon of the German summer labourers. Unlike "das steinreiche Holland", Westphalia was in the seventeenth century a poor and overcrowded country. The young farmer's sons would go to Holland each summer, to earn more money by mowing grass.
In Holland they were called 'hannekemaaiers', 'velings', 'poepen', or the like. They would bring their scythes, and a sack with bacon, sausage, eggs and ... linen. For the Dutch farmer's wives would buy the German linen that they used to wash for their 'poepen' (Buben).
Later on, these Westphalians would come with a basket (which was called 'kiep'), to apply themselves to cloth trade alone. At the end of the nineteenth century, these 'kiepkerels' with their long curved pipes were still often wandering in the borderland. Many of them have become rich in Holland, like Lampe, C(lemens) & A(ugust) Brenninkmeijer, Kreijmborg, Voss, Peek and Cloppenburg, and Dreesmann.
So it was not a coincidence that, when Karel's ancestor Gerard Althoff came from Dülmen to Amsterdam before 1700, he was to become a taylor.

Gisbert Hendriks, who was born in 1741 at Amsterdam, lived in the Amsterdam Looiersgracht. On the 19-th of May 1769 he married Catharina Althof.
The bride had been baptized in 1738 in the Amsterdam church of Moses- and Aäron. Her father and her grandfather lived in the Weesperstraat, and they were taylors. Her grandfather had come from Dülmen to Amsterdam as a 'kiepkerel', before 1700. As you know, Mokum had become a sea-trade metropolis in the seventeenth 'golden' century, attracting people to live there from all points of the compass. In the eighteenth century too, it was still a haven of refuge for all kind of people.
The married couple had at least one son, Johannes. This boy was baptized in the Roman Catholic church 'het Boompje', the 6-th of February 1772. Here starts already the history of the modern Hendriks family, which would live outside the capital. But the mother, Catharina Althof, was still to die in Amsterdam, in 1810. She was buried on the churchyard called 'Heiligewegse- en Leidsekerkhof'. This happened in the year in which emperor Napoleon visited the city, and Holland became a part of France for the next three years.

In these years, Johannes Hendriks was a sergeant in the army of Napoleon. He probably became a soldier for economic reasons, or maybe he was liable to military service. He may have been wandering around with the army, and he met with Femmetje Jansen in one of the stations. This Femmetje probably originated from Kampen or surroundings, because, after their son was born, she went to that city. She was a knitter and may have joined the army to work there, and she may have met with the quartermaster-sergeant Jan Hendriks when they both had to care for the clothes of the soldiers. Anyway, on the 13-th of February 1805, their little son Gijsbertus Hendrik Hendriks was baptized in the little church of Brielle in the province of Zeeland. There is a remark on the act of baptism which says that the father was a Roman Catholic. So the mother and the son probably were protestant. The Napoleontic army was in Brielle to guard against a possible English invasion.
Seven years later on, Jan Hendriks was in northern France, in the town of Metz in the region Alsace. From the Dead Book of the Metz military hospital we have the sad message that "mister Hendriks (Jan), forty years of age, sergeant in the 124-th Regiment Infantry of Line 5-th Battalion, born at Amsterdam in the Zuiderzee Department, had been brought in the hospital the 6-th of December 1812, and died on the 9-th of the same year, in consequence of the fever". It was the winter of the catastrophal march of Napoleon into Russia, where most of the soldiers were to stay forever. His regiment built the bridges for crossing the Berezina. Jan Hendriks probably got typhus before the battle and was sent to France with the first retiring units.
We learn from the archives that Jan Hendriks was a quartermaster who had to provide the soldiers with clothes and equipment. He had brown eyes, eyebrows and hair, a pointed nose, a medium size mouth, and no chin, and he had a flat face. This agrees with the features which Karel's grandfather in Kampen had.

The widow of Jan Hendriks, knitter Femmetje Jansen, had gone back to Kampen together with her little son Gijsbertus Hendrik. When the boy was older, he became a shoemaker. In May 1834, he married a maidservant, Zwerina van As, daughter of a sergeant of horse. Her father had been born in Geldermalsen (province of Gelderland), and he had been wandering around with the Batavian (Dutch) army. Zwerina was born in 1806 in Groningen. Her mother was from the city of Groningen, just like her ancestors since the seventeenth century. In 1812, Zwerina saw the Cossacks, who then came into Holland on their horses, and she saw the 'poor French' for the last time, when they fled to France. Thereafter, she and her father went to Kampen.
The married couple Hendriks-van As had at least five children in Kampen: a little son Gijsbert, who died in the age of three months, three daughters (Maria, Zwerina and Jansje), and then (on the 14-th of January 1843) Karel, the grandfather of Marian's father. Gijsbert Hendriks and his wife Zwerina van As were soldier's children. I think that they adapted themselves, even more than their parents, to the rigidly reformed Kampen people.

This Karel first became a stone-cutter, but he got tuberculosis. We now see that the boy was fully accepted in Kampen, for he got a nice job in the municipal hall: he became a beadle. He had married a bargeman's daughter from Zwolle, Johanna Sierink, in July 1873.
The father of the bride originated from a family of Hardenberg farmers and burgomasters. The mother was a needlewoman, and she was a bargeman's daughter as well. She was from Zwartsluis, and the father of her mother was a shoemaker, just like the father of the bridegroom.
The married couple had eight children:
Aaltje, who was to stay with her parents to do the housekeeping,
Lambertus, the joker,
Wilhelm, a military in the Dutch East Indies ('Insulinde'),
Zwerina, who was to become a wellknown Kampen (teacher and) evangelist,
Klaziena, who was to become a teacher too and wrote a booklet about Zwerina,
furthermore lithographer Gijsbertus,
nurse Johanna,
and last but not least the eldest son, Karel junior, which we will describe in the next section.
Karel senior died in December 1903. His wife, Johanna Sierink, didn't die before May 1930. She had then a textile shop in the Kampen Oudestraat (Old Street). Thus, the clothes-trade stayed in the family since the era of the hannekemaaiers until 1930 or even longer. 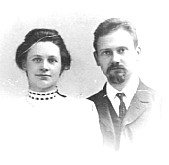 Karel junior, the father of Marian's father, was born on the 18-th of October 1880 at Kampen. He was allowed to study, but only to become a clergy-man. He moved to Utrecht to study there, and he met with the pretty Utrecht baker's daughter Wilhelmina Pluijm in her father's baker's shop next the Canal in the Utrecht street called Oosterkade. They were married in Utrecht, April 1906. See the picture above.
Among the ancestors of the bride were bakers, butchers and tobacco-planters. Later on, she was opposed to the use of sugar, meat and tobacco. Perhaps, this can be explained by the fact that her parents were divorced, but also by another fact: when they were living in Groningen, the married couple were very much impressed by the wellknown socialistic vegetarian, 'ûs verlosser (our redemptor)' Ferdinand Domela Nieuwenhuis. Her husband was rebellious as well, for, when he was a clergy-man in the Groningen village Aduard, he began studying to become a physician.
They had three children: Karel (1911), Leo and Gon. This last Karel will be dealt with in the next section. Later on, Leo and Gon had a few children of their own. Their mother died in 1940 at Velsen in the province of Noord-Holland. The father became a homeopathic physician in Groningen, and he was to marry two more times. He died in 1972 at Amsterdam, 92 years old.

So Marian's father Karel Hendriks grew up as a clergy-man's son. His parents gave him their liberal ideas about christianity, but also their ideals of being vegetarian and the socialistic ideals that were highly esteemed in Groningen and surroundings. He studied to become an electro-technical engineer, but he had also interest in the books of Multatuli (about injustice in the Dutch East Indies). He met with Else Suhr, at home with his parents. Friends had brought her to the province of Groningen when she was eleven years old, after her mother had died in Osternburg near Oldenburg.
Karel and Else were married in February of 1933. They had three children: before the war, Ger and Drude were born, and after the war came Marian.
During the war, Karel and Else offered resistance, bringing around little newspapers and helping people who had to hide themselves. This was why Karel was persecuted by the Dutch Security Service after the war, they suspected him of being a communist. Therefore, as an engineer, he could not work for the administration. But he built up in Veendam a flourishing industry of his own. In the years 1954-1956, however, he was employed by the Dutch administration as an electro-technical engineer on the dockyard in Manokwari (Dutch New Guinea, now Irian Barat).
In 1993, the married couple celebrated the fact that they were married 60 years ago. In the years thereafter they died, first Else and later on Karel (on the 24-th of December 1999).